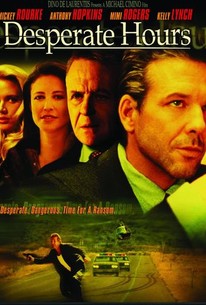 The Desperate Hours directed by Michael Cimino, is an attempt to remake the Humphrey Bogart classic of the same name with indifferent results. Bosworth (Mickey Rourke), a brutal criminal on the run with his partners, takes over a house occupied by an unhappily married couple Nora (Mimi Rogers) and Tim (Anthony Hopkins) and their young son and daughter. Bosworth has escaped from jail with the help of his defense attorney Nancy Breyers (Kelly Lynch). The film focuses on the interactions of the family and Bosworth as he plans his escape to Mexico. Cimino wastes little time in developing the characters or explaining the implausible premise that Bosworth would chose an occupied house and hold an innocent family captive when the logical choice would be to lay low and wait for his chance to escape. Both Hopkins and Rourke, usually excellent actors, give wildly over-the-top performances, aided by the lurid, over-written dialogue of the screenplay and the badly paced, ill-conceived direction by Cimino, which instead of creating tension and suspense, simply confuses the already muddled and incomprehensible plot. The Desperate Hours is a pale example of the original with little to recommend it.

Shawnee Smith
as May Cornell

Desperate Hours is an attempt to take a 1950s crime classic and remake it by turning up the heat, but Cimino has set the heat too high, and the result is an overwrought melodrama with dialogue even a True Detective editor would question.

It's an overblown remake of William Wyler's 1955 film The Desperate Hours.

hopkins cringing at rourke is absurd!

Desperate Hours plays like a deadly cat-and-mouse mind game.... It is downright eerie. i can best describe it as a thinking persons action thriller, but in its wild turns of the imagination, it is completely hypnotic!!!!.

Nothing wrong with the acting here - or the director, for that matter - but the film just kind of plods along at an uneven pace. I loved this movie years ago, but just can't seem to get into it nowadays. Still, Mickey Rourke is the epitome of cool as escaped murderer Michael Bosworth.

Desire is the deadliest weapon of all.