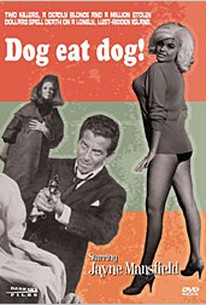 A fortune in cash is the bait that draws some would-be criminals into a feeding frenzy in this offbeat but stylish crime drama. Lylle Corbett (Cameron Mitchell) and his girlfriend, Darlene (Jayne Mansfield), have just pulled off the heist of a lifetime, stealing one million dollars in American currency as it's being transported from Europe back to the United States. Hiding out in a small, run-down hotel on the Mediterranean coast, Lylle and Darlene plan to hire a boat and make their way back to the States, where they can start spending some of their loot. However, Darlene's abundance of enthusiasm and lack of common sense cause Livio Morelli (Aldo Camarda), the manager of the hotel, to suspect that she and Lylle are responsible for the robbery that's been all over the news. Livio quickly hatches a plan to steal the fortune from Lylle and cover his tracks, but Livio's hardly the only one looking for the loot, with his spinster sister, Sandra (Dody Heath), greedy butler Dolph (Ivor Salter), and eccentric heiress Madame Benoit (Isa Miranda) all conniving to get their hands on the cash. Dog Eat Dog (aka La Morte Vestita di Dollar) was released in the United Kingdom as When Strangers Meet, the title of the novel that was the basis for its screenplay. ~ Mark Deming, Rovi

There are no critic reviews yet for Dog Eat Dog (When Strangers Meet). Keep checking Rotten Tomatoes for updates!

Ordinary 60's European heist flick mainly of interest for American stars collecting a paycheck. Jayne does not not look her best here.