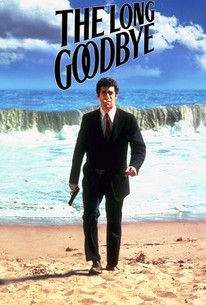 Critics Consensus: An ice-cold noir that retains Robert Altman's idiosyncratic sensibilities, The Long Goodbye ranks among the smartest and most satisfying Marlowe mysteries.

Critics Consensus: An ice-cold noir that retains Robert Altman's idiosyncratic sensibilities, The Long Goodbye ranks among the smartest and most satisfying Marlowe mysteries.

Critic Consensus: An ice-cold noir that retains Robert Altman's idiosyncratic sensibilities, The Long Goodbye ranks among the smartest and most satisfying Marlowe mysteries.

"It's OK with me...." Applying his deconstructive eye to the "film noir" tradition, Robert Altman updated Raymond Chandler in his 1973 version of Chandler's novel, The Long Goodbye. Smart-aleck, cat-loving private eye Philip Marlowe (Elliott Gould) is certain that his friend Terry Lennox (Jim Bouton) isn't a wife-killer, even after the cops throw Marlowe in jail for not cooperating with their investigation into Lennox's subsequent disappearance. Once he gets out of jail, Marlowe starts to conduct his own search when he discovers that mysterious blonde Eileen Wade (Nina Van Pallandt), who hired him to find her alcoholic novelist husband Roger (Sterling Hayden), lives on the same Malibu street as the absent Lennox and his deceased spouse. As numerous variations on the title song play in unexpected places, Marlowe encounters a shady doctor (Henry Gibson), a bottle-wielding gangster (director Mark Rydell), and a guard aping Barbara Stanwyck (among other stars), before heading to Mexico to stumble onto the truth once and for all. ~ Lucia Bozzola, Rovi

Critic Reviews for The Long Goodbye

Some of the improvisational scenes don't entirely work, but it's an ambitious and artful reinvention.

A masterpiece of sorts, it digs beneath the surface of the supposedly liberated spirit of the times to expose the ethos that took America into the Vietnam war and produced Watergate.

The film is so inventive in its situations and humor that its shortcomings - the blunt ideas at its core - don't become apparent before several viewings.

A subtle criqiue of the main character that contains some astonishing set pieces.

Raymond Chandler's sentimental foolishness is the taking-off place for Robert Altman's heady, whirling sideshow of a movie, set in the early-seventies L.A. of the stoned sensibility.

The Long Goodbye as a whole peels back the surfaces of private-eye stories, paying special attention to their macho bluster and abused women.

The Long Goodbye is not just classic Altman, classic neo-Noir, and classic satire, it's one of the best and most underrated films of the 1970s.

The film is cynical, of course, but also oddly moralistic via its handling of the noble if disheveled protagonist.

This is mordantly funny and deeply upsetting, and if you're looking for a way into the expansive oeuvre of Robert Altman, this is a great place to start.

The plot is extremely complex, with a couple of scenes relaying details in both the foreground and background simultaneously, neither of which should be missed.

There may be one or two more farcical elements here than is customary, but for a real send-up you would have needed Woody Allen rather than Gould who is All Wooden.

Audience Reviews for The Long Goodbye

Imagine walking down a riotous Bourbon Street in New Orleans one blurry Mardi Gras evening while following your best bud, who's not quite drunk but has had a few, and you'll get the sense Robert Altman and Elliot Gould convey in their 1970's spin on 1940's detective Philip Marlowe, which is kinda cool actually. The fact that very little of what's going on making any kind of real sense seems to be annoyingly quibblesome - just hang on. Seldom not interesting.

An intricate film noir satire that has all the elements that we expect from a Raymond Chandler story, only this time the protagonist of The Big Sleep is updated to the 1970s with a shocker in the end and a delicious melancholy song that will stay in your head for a long time.

So good, it hurts.

A very interesting film for film buffs. It's not fantastic, but it's a film for the sake of film. If you watch film noir, you should check it out. This movie takes the character of Phillip Marlowe, and puts him in the 70s culture. It is partly a parody, but it is also toying with what you expect for a film noir.