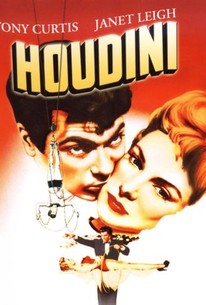 This highly fanciful but immensely entertaining biopic stars Tony Curtis as legendary magician/escape-artist Harry Houdini. Janet Leigh, Mrs. Tony Curtis at the time, co-stars as Houdini's wife Bess, while Angela Clarke is seen as Houdini's mother. The film follows Houdini's progress from sideshow entertainer to high-priced prestidigitator, and also touches upon his fascination with the occult--and his efforts to expose phony mediums. Philip Yordan's script (based on a book by Harold Kellock) suggests that virtually every portentous occasion in Houdini's life occurred on Halloween day, including his death from peritonitis in 1926. The facts of Houdini's life seldom get in the way of Yordan's story; while general audiences won't spot too many discrepancies, professional magicians tend to howl with laughter at some of the film's intentional boners. Example: In real life, Houdini's appendix was fatally ruptured by a punch to the stomach; in the film, he injures himself by accidentally bumping into one of his props, the sword-studded "Temple of Benares" trick--which hadn't yet been invented in 1926! Still, it's fun to watch Tony Curtis wriggle his way out of some of Houdini's most baffling escape routines (both Curtis and Janet Leigh were carefully instructed on the set by professional magicians, who swore the stars to secrecy concerning the tricks of the trade). For a more accurate slant on Houdini's life, see the 1976 TV movie The Great Houdinis, starring Paul Michael Glaser and Sally Struthers.

Grace Hayle
as Woman Who Screams

Hollywood legend Tony Curtis gives one of his best performances in Houdini, a colorful biography set in the 1890s through 1920s, and he does it playing opposite his then-wife Janet Leigh....

There's enough whimsy on display to make the film a pleasant charmer.

Colorful, but full of falsehoods, story of Houdini. Curtis is pretty good.

Accuracy, be darned; this is pure entertainment bio-pic with Tony Curtis at the height of his charismatic matinee idol period; plus working with wife Janet Leigh isn't bad either.

An interesting movie about the great magician Houdini, but it could have been better, maybe more biographical?

It was okay, a nice little love story in there, it had some interesting things

Highly fictionalized but very entertaining story of the great magician. Curits acquits himself well in the lead and Janet is lovely.

Not historically accurate (not by a long shot) but the chemistry between Tony Curtis and Janet Leigh makes this one fun to watch.