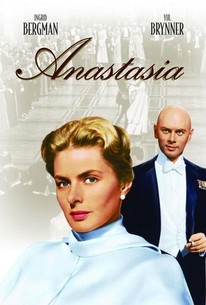 Anastasia is adapted from the popular stage play by Marcelle Maurette. The scene is Paris in the early 1920s. Ingrid Bergman plays a would-be suicide who is rescued by Russian expatriate Yul Brynner. Brynner's motives are far from altruistic; together with a group of Russian cohorts, he hopes to pass Bergman off as Princess Anastasia, the daughter of the late Czar Nicholas. If the conspirators are successful, they stand to collect the ten million pounds held in trust for Anastasia in the Bank of England. The biggest obstacle facing Brynner and company is the surviving Romanov empress (Helen Hayes), who must be convinced beyond a shadow of a doubt that Bergman is the genuine article. Anastasia represented Ingrid Bergman's return to Hollywood after several years' exile following her "scandalous" affair with Italian director Roberto Rossellini. ~ Hal Erickson, Rovi

After an absence of seven years from American-made films, beauteous Ingrid Bergman returns triumphantly in Anastasia.

It is a very entertaining movie. Given a chance, Miss Bergman looks as lovely as ever and gives an effective high-tension performance.

Anatole Litvak's Anastasia still stands as the most elegant rendition of a particularly provocative occurrence relating to Nicholas II and his assassinated royal family.

The film's ambiguous ending is mildly disconcerting but its merits are impressive. The excellent cast includes Helen Hayes as a royal old lioness and Yul Brynner as a conspirator with a conscience...

The romance between Anna and Bounine seems like an afterthought, but other story strands prove compelling, particularly those involving the Dowager Empress (a wonderful Helen Hayes).

Ingrid Bergman, returning from her Hollywood banishment after the Rosellini scandal, is at her best... .

After years of being blacklisting, Ingrid Bergman won a second Oscar for this Hollywood-style melodrama of mystery and romance, playing an amnesiac refugee who may or may not be the real survivor of the Russian royal clan.

This is one historical mystery that is often not mysterious and too unconcerned with history.

Bergman is enthralling as a peasant who would be princess

Is she the long lost princess? A return to those glorious days of a benevolent monarchy? Or only a deluded wannabe? Bergman walks this tightrope with particular aplomb, and that part of the story swirls a mist of mystery that is sweet indeed. But the other half of the story sinks because there is no magnetic energy between Brynner and she. Zip. Nada. Eh. They should remake this. Still a quality production.

A beautiful period piece with its own eccentricities, Anastasia is fun and even frivolous at times. It holds a quiet dramatic regard at the travesty of the protagonist's fate and her past without reference, but the only moments of clarity come from actress Ingrid Bergman, who steals the show. She portrays a lonely beggar on the streets of a Russian metropolis, and is found by a disgraced general looking for an imposter to take on the supposedly dead Grand Duchess Anastasia, She is trained to meet the duchess' grandmother who lives in Amsterdam. Easy to recognize from that brief synopsis is the fact that it parallels the very flawed and wildly entertaining nineties' cartoon movie of the same name. For that one reason I found this to be a sensational watch. Looking between the two to see where one fails over the other, while the other succeeds was a tiny thrill for this film nerd. Both succeed in holding interest until the very end, both have a happy ending that you know deep down probably didn't happen, and both are basically about the search for an identity of any kind. This pitiless character, though an abject liar and someone who's fate wasn't known at the time of the film, is really only looking for the truth behind herself. The film does a great job of not drawing its own conclusions by saying it believes one way or another whether it was truth. Though there wasn't a seminal villain or musical numbers, it has the same basic concept which kept interest throughout. This was the most realistic way the events themselves could possibly go, and it remained impartial throughout while staying tongue in cheek. The fact that it was a period piece was well reflected in extravagant costuming, elaborate sets, and dialogue that espoused true melodrama and Russian highbrow stubbornness, in part from the general, portrayed by the very cultured Yul Brynner. Though touchy because it was Bergman's second Oscar, and her time in Hollywood was later marred by controversy, it really was a symbol of Bergman's talents as an actress and her pull in America. If you are wondering, in 2009 DNA testing revealed Duchess Anastasia died with her family in 1918. I am not disputing that this film wasn't at least semi-accurate, but I also don't care because it was an amazing film no matter what.

Since I've already seen the new Disney movie of this, I know the story, so as a live action movie, I wasn't very impressed. Of course Bergman is a great actress, and I'm sure she tried her best with this movie, but her performance didn't help my opinion of the film. It was slow and boring.

How could any movie with Yul Brynner and Ingrid Bergman rate anything less then 4 1/2 stars. I don't know how my mind gets so wrapped up in so many different types of films but it does. When the movie first started I was wondering how long I was going have to watch this thing, then all of a sudden I was taken in. Yul Brynner plays is forceful roll as he always seems to do. and Ingrid Bergman , well I read where this movie was her comeback movie, maybe in America, but I seriously doubt that it was in Europe. I am sure both actors were far bigger stars outside the US, then in. This movie is a part of Russian History, which I promise will not bore you. The Costumes are fantastic. Nothing here that will put you to sleep, Its a shame that I didn't see this sooner, As one of my Dear Flixster friends sent me a recommendation on this one and I never past one down. Yes 4 1/2 stars, if I wait any longer it will be 5 stars. Thanks Raimoyna.