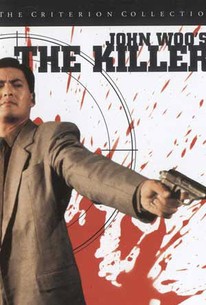 Chow Yun-Fat, director John Woo's favorite actor, stars as a professional assassin. The moral outrages of his employers lead Yun-Fat, who adheres to his own code of honor, to seek a way out of his lifestyle. Towards this goal, the assassin befriends the cop (Danny Lee) who has been sent to stop him, and whom Yun-Fat has inadvertently blinded. The violence in The Killer is graphic and uncompromising, but with a near-balletic finesse that can (without fear of sounding pretentious) be labelled sheer artistry. The film ended up as the highest-grossing Hong Kong production since the days of Bruce Lee.

Yan Zhaohong
as Bodyguard
View All

News & Interviews for The Killer

Now Streaming: The SpongeBob Movie, The Killer, Wayward Pines, and More
Total Recall: RT’s Favorite Gunfights
When Is A DVD Worth $400? A Look At Criterion Collectibles

View All The Killer News

Critic Reviews for The Killer

The work of a filmmaker operating at the highest level of his abilities.

Melodramatic from the start, it finally goes over the top to deliver a solid emotional punch.

It's as much a doomed romance as a shoot-'em-up.

A lot of claims have been made for this campy bloodbath concerto by Hong Kong director John Woo, and I must admit that he's even better than Brian De Palma at delivering emotional and visceral excess with staccato relentlessness.

The director repeatedly places the viewer at the center of the crossfire and turns the gyrating camera into the next best thing to a lethal weapon.

The most dementedly elegiac thriller you've ever seen.

Here, it always takes a dozen shots at point-blank range to fell an antagonist, which is remarkably amusing.

A pointless exercise in style.

One of the best action films ever made.

Like any true artist, Woo didn't satisfy himself with merely copying his heroes: he transcended them with his own ideas and innovations.

For all the bullets that are spent, The Killer spends just as much time ruminating on the likes of honor, friendship and even the allure of guns themselves

One of the few films to hold a legitimate claim to the title of Greatest Action Movie of All Time.

Audience Reviews for The Killer

John Woo's visceral action masterpiece The Killer is his finest directorial effort. Brilliantly acted with an exhilarating storyline, Woo delivers a film that is one of the finest examples of Asian action cinema. Chow Yun Fat is magnetic as Ah Jong, a professional assassin who gets double crossed by his employer. For action fans, this is one of the best films that you can watch. Brilliantly filmed, with memorable action sequences and a well thought storyline, which is simple in its execution, yet is highly engaging from start to finish, due to John Woo's kinetic directorial style. John Woo is famous for making pictures that are highly stylish, focusing on specifics in many scenes, such as slow motion and fast paced shoot 'em up sequences. Although nowadays, that style has been slightly overdone, Woo makes it his trademark, and makes the best use of such methods of filmmaking. The result is displayed here, and what's shown is a thrill a minute action flick that brilliantly uses its visuals to enhance the viewer's experience. I've seen many foreign action films, but none have the power that The Killer has. Woo would later direct, bolder action films, but none have the character that this film possesses. The reason is simply put, that this film is raw, gritty and ultimately more intense. John Woo's later work would be more polished with emphasis on complex stories, and excessive effects. However here, everything is handled in a way that, it does show Woo's unique directorial style, while not overwhelming you with excessive slow motion and other effects that would be a standout in his future efforts. This is John Woo's cinematic masterpiece, a brilliant, piece of cinema that relies on memorable sequences of well thought out action, and a simple plot to create something that you can just immerse yourself in, a strap in for a highly entertaining ride from start to finish. You won't find a finer film of the stature.

An explosive and heart-pounding action classic. An unforgettable and killer action movie masterpiece. A full-throttle action-packed extravaganza that pushes the limit. A spectacular action flick that delivers some of the best action sequences and gun-battles in Hong Kong action cinema. The gun-fights snap and crackle of pure awesomeness. Director, John Woo is one of the true kings of action movie-making. This film stand with his best like Face/Off, Hard-Boiled and A Better Tomorrow. Chow Yun-Fat is at his best. Danny Lee is sensational. Lee and Yun-fat are fantastic together, they square off with one another nicely in scenes that include tension and great character development. A great film that has a great sense of characters. range, emotional depth and story as well as fire-power. One of the best action movies I have ever seen. It's damn near perfect.

A fabulous action drama. The actors do a great job, the story keeps you on the edge of your seat, and the action is so overwhelming, it's hard not to love this movie. There are also some comedic moments. This was a very entertaining movie, and I recommend it.

Some may doubt it, but 'The Killer' is the best action film ever made. John Woo's bloody and brilliant action film stars the master of Hong Kong heroic bloodshed films, Chow Yun Fat, as the title assassin, who falls in love with the singer Sally Yeh. After he injures her in one of his hits and feels responsible, her sight begins to deteriorate to the point where she will become blind. Taking his weapons he agrees to one more hit to get the money to fund an eye operation for her. That, along with his tracking down by a Hong Kong cop is the basis of the film. A simple storyline and a basic few themes of love, honour and friendship are slung together against a film dominated by bullets and blood. But the action is what moves the character arcs and more important themes along. Although Woo fills his film with violence and action, a bodycount of 120 being recorded, it is not portrayed as honourable or acceptable. The themes of honourable killing versus dishonourable killing are explored in great detail, and the killings are displayed as morally wrong. The action sequences themselves are incredible. Stylised beyond belief, in an explosion of brilliantly executed fighting, which only makes you sit back and shake your head, in an amazed and overpowered fashion. Scattered throughout the film, these sequences, keeping you breathing heavily, climaxing in a final church battle which will wind any Hollywood action film, especially 'Die Hard'. As well as these massive shootouts, there are also quieter affairs, such a scene with a quiet standoff between the killer and the cop in Sally Yeh's apartment. It's completely over the top and unrealistic, but never overwhelming as the tone keeps itself in check, balancing humour as well as real tear creating pure emotion. A great amount of wonderfully directed sequences, brought together under a film whose themes and overall meaning are not shoved in your face, like so many American action films today, gives 'The Killer' the grand title of best action film ever made.