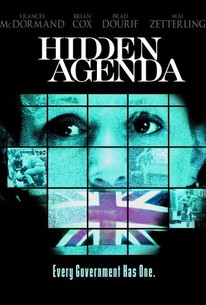 This political thriller is set against the backdrop of Northern Ireland's "Troubles" and directed in the documentary fashion common to British filmmaker Ken Loach's films. Paul Sullivan (Brad Dourif) and Ingrid Jessner (Frances McDormand) are American attorneys serving on a human rights group working to monitor cases of prisoner mistreatment in war-torn Belfast. When Paul learns of some information that may be injurious to the Thatcher government, he is killed, and a top-secret tape disappears. Assigned to the case, Inspector Kerrigan (Brian Cox) is joined by Ingrid in probing Paul's death, which seems to be related to rumors of a high-ranking cabal within the British government working to undermine the Irish Republican Army and liberal policies toward Irish separatists through violent and illegal means. Ingrid meets with Harris (Maurice Roeves), a former British Secret Service agent who's now turned on his former cronies. Together, they look for the top-secret tape.

Though it attempts to make an acceptable theatrical entertainment out of a complex political saga, Hidden Agenda lacks bigscreen impact.

There's plenty of evidence of Loach's undiminished power as a film-maker, and equally ample evidence that something is very rotten in the state of Northern Ireland.

Ken Loach's Hidden Agenda must be the most buttoned-down movie about a conspiracy theory ever made.

Its own terms and for much of the way, this is a superior thriller.

Hidden Agenda does sometimes feel like rather talky stage-play, but thanks to an increasingly emotive performance from Cox, the film manages to break into some energetic moments.

Well-intentioned, but rather murky.

It's made with the flaggelatory ardour that Ken Loach brings to all his films, a hard edged realism pounded into the mortar of cinema with naturalism

Made in 1990, it feels and looks like it's from 1980. Frances McDormand is an especially snoozy disappointment in a woefully miscast role.

Gripping stuff, even if the outbreak of peace in Northern Ireland has somewhat blunted the message.

Hidden Agenda could be accused of being dogmatic (Loach's films frequently slam the U.K. government), but the director keeps a sense of gritty authenticity throughout.

A Ken Loach film without a great deal of hype but I would highly recommend searching through the older film rack to take a look at this one.