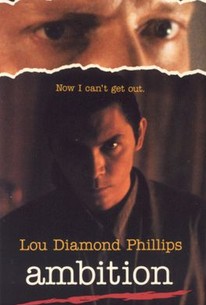 One of three short films made by Hal Hartley in 1991, along with Surviving Desire and Theory of Achievement, the nine-minute short Ambition is the shortest and most stylized film of the trilogy. (All three are available on a single videocassette, also entitled Surviving Desire.) Ambition begins with a perfect distillation of Hartley's deadpan style, as a bored man slowly pushes a coffee cup off a table; he then proceeds to break everything else in the kitchen. The film continues along these lines, alternating mundane, day-to-day details with comically exaggerated violence. After breakfast, the man leaves for work; on the way he gets into wordless, hand-to-hand combat with a variety of assailants. At his workplace, an odd, symbolic art gallery, the man is interviewed by a woman about his work. Immediately afterwards, he is chastised by his boss and beaten by two anonymous men in business suits. Hartley builds the film musically, using certain images and bits of dialogue as recurring motifs. The piece is structured as variations on a theme, explorations of the meaning and importance of work. The result is a pensive, sad meditation on frustrated ambition and regret, leavened by moments of witty dialogue and playful experimentation.

There are no critic reviews yet for Ambition. Keep checking Rotten Tomatoes for updates!

There are no featured reviews for Ambition at this time.