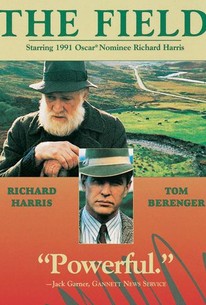 Richard Harris was nominated for several awards (including the Oscar and Golden Globe) for his performance in The Field. The time is the mid-1930s; the place, western Ireland. For many years rugged individualist Bull McCabe (Harris) has been cultivating a small plot of rented land, nurturing it from barren rock into a fertile field. Now, however, the widow who owns the land plans to sell it at auction. The infuriated Bull shows up at the bidding, secure in his belief that none of his neighbors will dare bid against him. But Bull has not taken into consideration a wealthy Irish-American (Tom Berenger), who intends to pave over the land and bring new industry to the area. "This is deep, very deep, deeper than you think" warns Bull, as he sends his grown son (Sean Bean) to "persuade" the American to withdraw his bid. Armed with the foreknowledge that Bull's tenacity has caused heartbreak and tragedy in the past, the audience steels itself for the awful consequences still to come. Punctuating the storyline are the periodic appearances of the toothless village idiot, played by John Hurt. Originally produced for British television, The Field was based on the landmark play by John B. Keane, and directed by My Left Foot's Jim Sheridan.

Tom Berenger
as Peter - The American

David Wilmot
as Boy at Dance

Rachel Dowling
as Girl at Dance

Sarah Cronin
as Girl at Dance

Brendan Gleeson
as Quarryman
View All

Critic Reviews for The Field

The Field is a movie that all too often reveals its origins as a play.

As overwrought as [My Left Foot] was understated.

Sheridan seems out in left field here, undone by the sheer hokum of the material.

A painfully overwrought combination of A Touch of the Poet and Zorba the Greek.

The Field is a grim allegory of hard life on the land -- a symbolic play, transplanted uneasily to the greater realism of the film medium, where what we might accept on the stage now looks contrived and artificial.

One of Jim Sheridan's weakest and most propagandistic films, this Iriah social melodrama was made between two highlights: My Left Foot and In the Name of the Father.

Richard Harris's standout performance elevates this simple fable into a near classic.

Predictable and interminably slow-moving, The Field appears at times to be an uneven blend of John Ford's The Informer and David Lean's Ryan's Daughter.

Audience Reviews for The Field

This film explores similar themes to Manon of the Spring and Jean de Florette. Those films do it far more effectively. Harris is fantastic as could be expected. Any shortcomings are not attributable to him.

Seen Daniel Day Lewis in There Will Be Blood? Thought he was good? Me too, till I saw Richard Harris in this. The film itself is very good but it's Harris' stunning performance that grabs you and holds you taught right to the very end when it seems as though even the film can't keep up with him. This is the finest and most powerful performance by an actor I have ever seen. Outstanding.