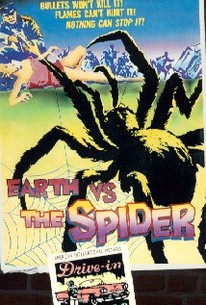 Earth vs. the Spider Photos

A small Midwestern town comes under siege from a giant, blood-thirsty tarantula in this rock-n-roll horror opus from Bert I. Gordon also known as Spider.

Critic Reviews for Earth vs. the Spider

One of those so-bad-it's-good '50s horror/sci-fi "classics."

Audience Reviews for Earth vs. the Spider

This film is part of the Samuel Z Arkoff Cult Classic Collection. Not a bad film, I'm sure a good Drive In Crowd draw during 1959. About a small town with a pretty dumb sheriff who is invaded by a Giant Spider. It takes a Science teacher and a small town road crew to do away with this beast. Comical in some parts, It amazes me that this type of film capture my attention as a kid as I would sneak up at night to see chiller theater. One scene during movie was a movie theater shot where posters for puppet people and War of Colossal Beast was shown. All in all as far as science fiction Black & white Movies are concern its worth 4 stars.

I really enjoy these crappy monster flicks with horrible acting and storys. But HANG ON! The effects aren't too bad flawed YEAH but still anything more awesome then Wood ever pulled off. Poor acting no doubt made because of the Godzilla craze (MONSTER MOVIES!)

Another giant spider? You gotta watch those insects don't you? This movie is pretty cheesy, but it has some cool scenes.

Earth vs. the Spider Quotes