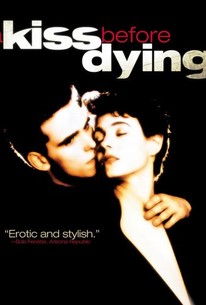 A Kiss Before Dying Photos

A Kiss Before Dying is director James Dearden's remake of Gerd Oswald's 1957 thriller. Jonathan Corliss (Matt Dillon) is obsessed with gaining wealth and prestige. In order to achieve his goal, he chooses the family of one particular local tycoon, Thor Carlsson (Max von Sydow) and coolly seduces Carlsson's gullible daughter Dorothy (Sean Young). When she becomes pregnant, which will force their marriage and her disinheritance, he murders her. He then searches out Dorothy's grieving twin sister, Ellen (Sean Young), in a dual role, and marries her. Unfortunately for him, Ellen, never having believed Dorothy's death to be a suicide, begins to investigate. Her investigations lead to the disclosure of Jonathan's true intentions.

Nancy Herman
as Receptionist
View All

Critic Reviews for A Kiss Before Dying

This is Matt Dillon's first film since Drugstore Cowboy, and demonstrates again that he is one of the best actors working in movies.

Most unkindly (but amusingly), the 1992 Razzie Awards gave Sean Young both the Worst Actress and Worst Supporting Actress Awards for playing the twins

Audience Reviews for A Kiss Before Dying

An interesting movie. We know who the bad guy is, but the characters in the movie do not. Ellen can't quite believe that her sister committed suicide, and she continues investigating over a couple of years -- while meeting, falling in love with and marrying the character played by Matt Dillon. It is not quite a whodunit, but a figure-out-who-did-it. I'd like to see the original 1956 version of the movie though.

This truly risible thriller, a remake of the 1956 film, is rendered even worse by Sean Young who, by playing twins, is doubly dreadful.

I have no idea if these lines occur in this 1991 remake of the original 1956 classic. This one, I've not seen, though Sean Young is a favorite of mine. I'm actually writing about the 1956 original here, since it is not in the flixster database.

With those fateful lines cited above, the wheel turns on Robert Wagner, an absolutely cold-blooded killer whose conscience was apparently left behind in his crib along with his diapers and any love for his mother. Wagner, I believe, has never received his due recognition as an actor. I believe he has suffered due to his groundbreaking, in terms of big screen actors, move to TV. Let me tell you flixster friends, is you've not seen the original, you have missed Wagner's brilliant fleshing out of one of the nastiest dudes in flim history. I'm actually surprised that this excellent work did not get him permanently stuck in villain roles. I'll guess that he escaped stereotyping thanks to a Hollywood saavy and to the help of both a good agent and of a wonderful woman who would shortly after this time become a great wife :)

A Kiss Before Dying Quotes