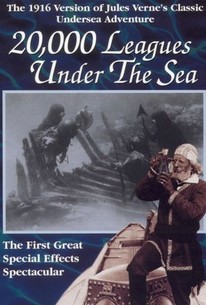 The 1916 silent version of Jules Vernes' 20,000 Leagues Under the Sea was "sold" on the basis of its advanced underwater photography, the handiwork of the legendary Williamson Brothers. The film's storyline combines elements from both 20,000 Leagues and another Verne novel, Mysterious Island. Towards the end of the film the power-mad Captain Nemo, whose futuristic submarine is the film's centerpiece, explains why he has come to hate mankind--which segues into an elaborate flashback sequence set in India, which seems to have been concocted by Rudyard Kipling. The cost of this film was so astronomical that it could not possibly post a profit, putting the kibosh on any subsequent Verne adaptations for the next 12 years. 20,000 Leagues Under the Sea is available today in a tinted print, which has been somewhat truncated due to film-stock deterioration.

To describe in detail the marvelous workings as depicted by the Messrs. Williamson would consume columns of space and more columns to give even a synopsis of the melodramatic plot.

The filming of Jules Verne's immortal story has been capitally and, from a photographic viewpoint, at times, wonderfully done.

A cluttered work that nevertheless maintains interest with its groundbreaking underwater photography and Verne's durable framework.

The struggles of the men against the undertow and the force of the water proved interesting, while the battle between the unarmed pearl diver and the octopus is weird and thrilling.

Oh, I love this. It's a shame about sound and colour.

To modern audiences, accustomed to fluid storytelling techniques, this work may seem something of a relic and yet, forgiving the herky-jerky story jumps, one has a window into the imagination of the past. Captain Nemo seeks revenge on society and his instrument is a marvel of advanced design, all metal vessel with undersea capabilities. A remarkable achievement of sci-fi storytelling is worth a look to open hearts and minds.

I guess you can call this the first Michael Bay film. 20,000 Leagues Under The Sea was the second adaptation of the Jules Vernes novel, it features iconic mariner costumes. The story telling was a mess however, but the special effect was impressive considering the budget. It's not the most interesting films but deserves cinematic recognition.