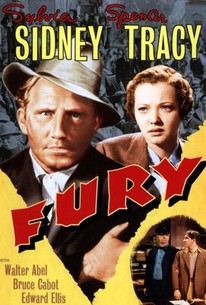 Fritz Lang's first American film is a vigorous and perceptive indictment of mob law, starring Spencer Tracy and Sylvia Sidney. Katherine (Sidney) leaves her boyfriend, Joe Wilson (Tracy), behind in their Midwestern hometown when she takes a job in another city. Joe is a decent, hard-working soul, who wants to save up to buy a gas station and looks forward to the future when he and Katherine can get married. A year later, Joe is traveling to meet Katherine so that they can be married. Driving through a small town, Joe is stopped by a deputy sheriff waving a shotgun. Apparently there has been a kidnapping, and the fact that Joe has peanuts in his pocket circumstantially incriminates him in the crime. Joe is arrested and jailed. As Joe sits in his jail cell, the local townspeople begin to talk and whisper and spread rumors. Finally, a lynch mob forms and heads toward the jail. The mob tries to storm the jail and frustrated over their inability to penetrate the prison walls, they set the jail on fire. Joe barely manages to escape ("I could smell myself burning"), but the mob thinks that Joe has been burned to death. Behind the scenes, and with the help of his brothers, Joe tries to rig the verdict in the impending trial of the 22 vigilantes.

Will Stanton
as Drunk

Esther Muir
as Girl in Nightclub

Clarence Kolb
as Burgermeister
View All

Lang's first English language film seemed to anticipate the horrors at Abu Ghraib as far back as 1936.

Whereas Lang's 1931 M was more ambiguous in its depiction of mob justice, this one clearly shows the dangers of vigilantism.

This gruesome but enthralling exploration is conducted with great skill and perception by Fritz Lang.

Fury, the story of how a mob in a small southern town lynches an innocent man who has been arrested under suspicion of kidnapping, is astonishing, the only film I know to which I have wanted to attach the epithet of "great."

The film's message is resonant far beyond the moment of its creation, speaking even to our modern-day political reality.

Probing mass psychology and mob violence in a small-town, Lang's first American film, starring Spencer Tracy, expresses his pessimistic view of human nature that defines all of his American ones.

Fury offers a striking portrait of the structure of society; its assorted classes, organizations and technologies, and methods of law and order...

While marred by a pat ending, Fritz Lang's examination of lynch mobs is still terrifying.

As powerful and fresh as when it was made

Fritz Lang's first American film after fleeing Nazi Germany and the oppression of Adolph Hitler. A predecessor to the classic film noir of the 1940s and 50s, Fury has a wealth of elements which would later define the noir style. Outstanding performances from Spencer Tracy and Sylvia Sidney help cement this 'wrong man' courtroom drama as a true timeless classic.

I loved this movie, Tracy is an innocent man fighting for his life, and everyone wants to kill him! It's so exciting and suspenseful. A must see.

it's still a powerful film about mob mentality and perhaps more about anarchism than lynching since it ignores the obvious racial issue. otherwise it seems a pretty glaring omission since at least 80% of lynching victims were black. i have to believe the studio wouldn't allow it to be referenced for commercial reasons. the film can also be read as anti-democracy given that the original title was mob rule. thx v :) mgm invades warner territory of socially conscious films. great performance by spencer tracy as everyman.

[font=Century Gothic]In "Fury," Joe Wilson(Spencer Tracy) and Katherine Grant(Sylvia Sidney) are madly in love and want to get married but times are tough and she has to take a job teaching in another city. Joe vows to come get her once he has saved up enough money. He invests in a gas station which thrives by its close location to a new racetrack, saving up for a car in the bargain.(He works there with his two brothers(Frank Albertson & George Wolcott) who he persuaded to have nothing to do with a local racketeer.) On the way to collect his fiancee, Joe is stopped by the police and held on suspicion in a local kidnapping case. But the public hears something else and rumors spread...[/font] [font=Century Gothic][/font] [font=Century Gothic]"Fury" is directed by Fritz Lang who left Germany one step ahead of the Nazis. The movie is a powerful cautionary tale about lynching that still resonates today. It should be mentioned that Lang could not mention race but then he did not have to.[/font]