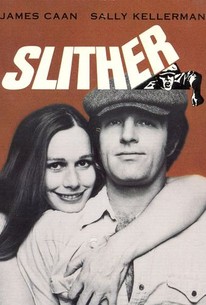 In Slither, James Caan plays Dick Kanipsia, a recently paroled car thief whose plans to go straight are interrupted when his best pal Harry Moss (Richard B. Schull) is shot and killed. As he lies dying, Moss advises Kanipsia to seek out fellow crook Barry Fenaka (Peter Boyle), who knows where a huge amount of money stolen by Moss is hidden. Aware that he himself is a marked man, Kanipsia has to play it cool en route to Fenaka. This proves difficult when his erstwhile travelling companion, dopehead Kitty Kopetzky Sally Kellerman, robs a roadside diner in his presence. Since nothing is ever quite what it appears to be in Slither, perhaps we shouldn't tell you any more. This truly serpentine tale served as the feature-film directorial debut of Howard Zieff, the former TV-commercial helmsman responsible for the famous Spicy Meatball ad.

Richard B. Shull
as Harry Moss

Garry Goodrow
as Man with Camera

Seamon Glass
as Farmer in Truck

Al Dunlap
as Man in Men's Room
View All

Zieff's talent goes further than a skill for packaging sound scripts and performances.

Zieff would rather go for good moments than construct an over-all structure. So the movie is heavy on moments, light on structure, and that's OK.

There are a number of amiable performances. All first-rate.

This movie has a nostalgic retro feel to it, like the old Universal horror movies that we now find very funny. But alas, where are all the drive-in theaters to show it in?

As with so many zombie movies, table manners have no place here--why should they when fresh intestines are on the menu? Gluttony, however, does bloom in Slither, and what it builds to is one savage little garden.

Sometimes amusing mashup of comedy and crime drama with an ambling mood and relaxed performances from its cast.