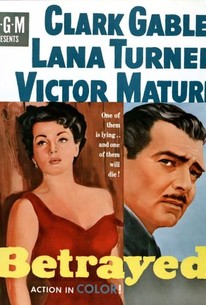 Clark Gable's final effort for his longtime home studio MGM, Betrayed is an exciting espionage thriller set during World War II. Intelligence agent Gable is ordered to keep tabs on suspected Nazi collaborator Lana Turner (a brunette for the occasion). Both Gable and Turner join the Dutch underground, making contact with a flamboyant resistance leader known as "The Scarf" (Victor Mature). Turner poses as a sexy chanteuse, the better to gain the confidence of the lascivious Nazi officers. Within the next few weeks, several underground operatives are captured and shot, and it begins to look as though Gable's suspicions concerning Turner are correct. The real collaborator is revealed some twenty minutes before the finale, but the suspense level is expertly maintained throughout. The location-filmed Betrayed would later be mercilessly lampooned in the 1984 spy spoof Top Secret! ~ Hal Erickson, Rovi

Victor Mature
as "The Scarf"

Nora Swinburne
as The Scarf's Mother

There are no critic reviews yet for Betrayed. Keep checking Rotten Tomatoes for updates!

There are no featured audience reviews yet. Click the link below to see what others say about Betrayed!