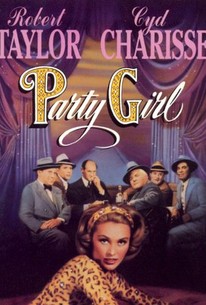 Robert Taylor stars in director Nicholas Ray's Party Girl as the traditional Ray anti-hero: a criminal lawyer who's a little bit of both. Fronting for Chicago gang boss Lee J. Cobb during the late 1920s, Taylor manages to get Cobb-underling John Ireland off on a murder rap. Cobb throws a party to celebrate the event at his penthouse, where showgirl Cyd Charisse performs a sexy dance. Ireland has the hots for Charisse, but she's more interested in Taylor. Thanks to her good influence, Taylor decides to quit the rackets. But after agreeing to take one more case for Cobb, Taylor is wounded in a shoot-out and hauled before prosecutor Kent Smith. Smith orders Taylor to testify against Cobb; the lawyer agrees to do so provided that Charisse is given police protection. Unfortunately, Cobb gets to Charisse first and threatens to throw acid in her lovely face while Taylor watches helplessly.

Robert B. Williams
as Guard

Maggie O'Byrne
as Woman
View All

Taylor and Charisse have never been better, and rarely has Ray's theme of two flawed individuals trying to strike a symmetrical balance achieved a more beautiful and convulsive expression.

Unfortunately, the picture's plot (good girl helps bad guy go straight) fits the mood like a concrete overshoe, and the more than generous serving of cheesecake is pretty soggy stuff.

As in all Ray's films, ideas and emotions are transformed into stunning visuals.

There is little that is novel or exciting about this Party Girl, despite her trappings or the occasional gunplay that surrounds her.

A big-budget modern version of the old-fashioned gangland melodrama, made quite tolerable by some good performances and the addition of two musical numbers starring the lustrous Cyd Charisse.

The CinemaScope and Metrocolor production gives the film a regal feeling that is at odds with the edgy, dangerous setting.

It's a honey of a film, never mind the superficial flaws.

The two leads are great at displaying vulnerability around each other, but it's Cobb's role as the gangster boss that steals the acting honours.

An interesting blend of MGM musical and film noir. Film is another one of Hollywood's "could have been great, if only ..." and in this case it's too bad the studio didn't give filmmaker Nicholas Ray complete control of this unique film. Nonetheless this is worthy of your eyes if only to see Cyd Charisse and her stunning wardrobe.

Party Girl is a negligible mess whose biggest obstacle is itself and its inability to figure out what it wants to be. At points its a mob movie, nothing as great as Warner Bros was putting out in the 30s but a mob film nonetheless. Then it meanders into Douglas Sirk melodrama territory where it also fails. Oh, and there are also a couple of dance numbers where Cyd Charisse proves she can dance better than she can act. Robert Taylor does an okay enough job and Lee J Cobb... well, plays Lee J Cobb as a bad guy. The best part of Party Girl outside of its completely inappropriate title is Nicholas Ray's direction and the photography. Namely during those previously mentioned dance numbers. Aside from those things I was waiting for it to end after the first 45 minutes.