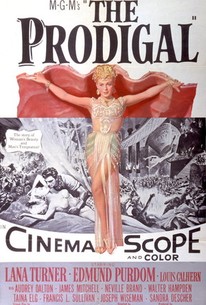 One critic has noted that The Prodigal was aptly titled, inasmuch as it was all too prodigal with the funds of the then-flagging MGM studios. In its retelling of the 22-verse Biblical story of the Prodigal Son, the film helpfully fills in the story details inconsiderately left out of the Old Testament. Edmond Purdon plays Micah, the wastrel son of Eli (Walter Hampden) who takes his share of his father's fortune and blows it all in wicked old Damascus. Micah's one redeeming feature is his unserving faithful in the Lord God Jehovah. Pagan princess Samarra (Lana Turner at her most giddily exotic) intends to seduce Micah into renouncing his faith, only to get stoned to death for her troubles. Nearly two hours pass before Micah returns home and the fatted calf is killed in his honor. If for nothing else, The Prodigal would be memorable for Lana Turner's pagan-ritual costume, which is little more than a glorified bikini.

Critic Reviews for The Prodigal

A dumb and unconvincing Bible flick

...a lavish MGM spectacle of the era, with the movie's costume and set designers the real stars of the show.

Audience Reviews for The Prodigal

Well appointed but plodding biblical spectacle with Lana looking beautiful in some eye popping and for the period very revealing costumes. A high quality cast is trapped in this junior league Sunday school lesson. Still if you're a fan of "The Robe", "The Ten Commandments" and so forth then there are things to enjoy herein.