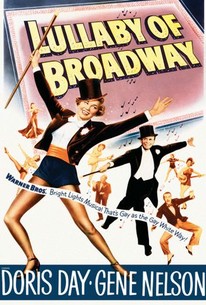 Warner Bros. made good use of its backlog of Harry Warren/Al Dubin tunes in its 1951 Doris Day musical Lullaby of Broadway. Day plays an American musical comedy star who comes back from a successful London engagement to visit her mother Gladys George. A once-great Broadway star herself, George is now living in drunken poverty, but this fact has been carefully hidden from Day by lovable millionaire S.Z. Sakall, who lives in the mansion once owned by Ms. George. Sakall arranges for George to pretend to still be the lady of the manor and to host a party in Day's honor. During the reception, love blooms between Day and Broadway hoofer Gene Nelson. There are several breakups and reconciliations involving a number of characters before the big-money finale. While the musical highlights in Lullaby of Broadway are consummately produced, the script (based on a story by Earl Baldwin) occasionally falls flat, especially when striving for laughs. The best comic bit is a throwaway: Sakall enjoys a nocturnal bottle of beer, which in closeup is advertised as "The Beer That Made Cincinnati Famous" -- Cincinnati being, of course, Doris Day's home town.

Murray Alper
as Joe the bartender

The De Mattiazas
as Specialty Act

Page Cavanaugh Trio
as Himself

Bess Flowers
as Passenger on Ship

Critic Reviews for Lullaby of Broadway

The plot is banal, but some of the musical numbers are good, and it's an enjoyable film due to Doris Day, on her way to major stardom.

Audience Reviews for Lullaby of Broadway

A good story for a musical, but I didn't think the songs were all that great, it might have been better if they fit what was going on in the movie. Overall, an okay movie.