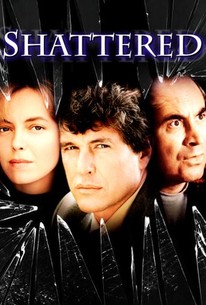 In this film, based on the Richard Neeley's novel, The Plastic Nightmare, architect Dan Merrick (Tom Berenger) wakes up in a hospital after being thrown into a coma by a car accident that horribly disfigured his face but left his wife, Judith (Greta Scacchi) unharmed. Suffering from amnesia, Dan is troubled by disturbing nightmares and the discovery that his wife has been having an affair with another man. When Dan tracks down the private detective that he had hired to follow his wife before the accident, he makes a series of shocking discoveries.

Debi A. Monahan
as Nancy

The movie is finally so ridiculous it cannot be taken seriously as a thriller or anything else, but there are moments that work, and you'll love the look on the hero's face when he discovers the identity of the dead body.

At times the melodrama overtakes the suspense, but for the most part, the conundrums remain interesting.

Hitchcock inspired tale of amnesia has Berenger trying to piece his memory and his life together after a really bad auto accident ... "and what about that dead body over there, who's that?" Wolfgang Peterson penned and directed this trifle bit of escapism.

Tom Berenger wakes up from an accident with no memory, a great job and a great wife. Well, almost a great wife. Except for the fact that she wants to kill him.

The intriguing, twisting plot is wildly entertaining if you can overlook the awfulness of Tom Berenger and Greta Scacchi's acting.