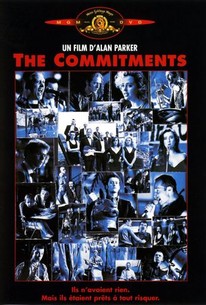 Critics Consensus: The Commitments is a vibrantly funny and blissfully heartfelt ode to the power of music.

Critics Consensus: The Commitments is a vibrantly funny and blissfully heartfelt ode to the power of music.

Critic Consensus: The Commitments is a vibrantly funny and blissfully heartfelt ode to the power of music.

"The Irish are the blacks of Europe, Dubliners are the blacks of Ireland, and the North Siders are the blacks of Dublin ... so say it loud -- I'm black and I'm proud!" Or so Jimmy Rabbitte (Robert Arkins) tells his slightly puzzled friends as he tries to assemble a rhythm & blues show band in a working class community in Dublin in Alan Parker's film The Commitments. Jimmy is a would-be music business wheeler and dealer, and he's decided what Dublin needs is a top-shelf soul band. However, top-shelf soul musicians are hard to find in Dublin, so he has to make do with what he can find. However, after a long round of auditions, Jimmy makes two inspired discoveries: Deco (Andrew Strong), an abrasive and alcoholic streetcar conductor who nevertheless has a voice like the risen ghost of Otis Redding, and Joey "The Lips" Fagan (Johnny Murphy), a horn player who knows soul music backwards and forwards and claims to have played with everyone from Wilson Pickett to Elvis Presley. Before long, the band -- called the Commitments -- is packing them in at local clubs. But do they have what it takes to make the big time? Based on the novel by Roddy Doyle, who also co-wrote the screenplay, The Commitments is sparked by fine performances by its young cast and enthusiastic performances of a number of '60s soul classics; the cast, who play their own instruments, reassembled the band for a concert tour after the film became a hit.

Ger Ryan
as The Pawnbroker

Phelim Drew
as Roddy the Reporter

Lance Daly
as Kid with Harmonica

John Cronin
as Kid with Horse

Winston Dennis
as Man in Limousine

News & Interviews for The Commitments

View All The Commitments News

Critic Reviews for The Commitments

The locations have a certain grimy reality. The musical sequences are downright combustible, exploding off the screen. And the cast -- young and inexperienced as they are -- manage to convey poignant believability.

The film offers no message, no solutions, only a great time at the movies.

This is probably Alan Parker's best film, in part because it's one of his most modest.

Foul-mouthed, fast-talking and very funny, this is Parker's best to date.

Mr. Parker is capable of whipping a series of quick, well-edited snippets into a happy collage of musical high spirits.

At base The Commitments is about the common experiences and emotions that unite us.

Filmmaker Alan Parker does a superb job of instantly luring the viewer into the deliberately-paced proceedings...

It is fun, warm, moving, lively -- an altogether enjoyable film.

Memorable, lingering in one's mind after it has ended. Perhaps, in the end, it's a tad wiser than it initially lets on.

It's a relaxed, colorful creation, remaining true to rascally human behaviors while respecting the unifying power of music. Downright irresistible.

Audience Reviews for The Commitments

That dude has some pipes

"We skipped the light fandango turned cartwheels 'cross the floor. I was feeling kinda seasick but the crowd called out for more" I'm still in awe by how clever was the use of that enigmatic line, it not only comes from one of my favourite songs, but works as a dignified compendium of a short-lived but magical trainwreck that the characters, and the public, can only watch passing by with a smile. Quotable dialogue, riotous moments and genuine musical passion throughout. A gem once voted, deservedly, as the best irish film of all time.

A story documenting the rise and fall of the band The Commitments. With enjoyable vocals and those well known songs, this film makes for an easy watching tongue in cheek piece. In a seperate issue, I can't help thinking this discredits the film ONCE ever so slightly I had thought their performances were really good, I hadn't known Glen Hansard had already appeared in this film.

In the tradition of Waking Ned Devine and The Full Monty, this is a delightful, optimistic ensemble piece from across the pond. While there are few conflicts in between the characters, the main conflict that drives the film forward is understated - people wanting to succeed in an world that doesn't assent. There is little in the way of comedy, "littler" in the way of drama, and too many musical sequences for my taste, but it's hard to fault the movie for any of these things. Suffice to say that I mildly enjoyed the experience of watching this film, and there's little to complain about.