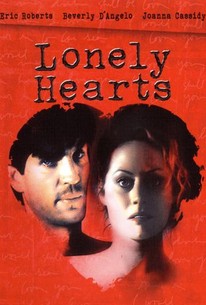 Lonely Hearts is a modern film noir in which a lonely woman meets and falls for a man whom she refuses to let go. Alma (Beverly D'Angelo) is a wallflower who lives with her mother and works at a Social Security office. In her desperation to make some sort of social life for herself, she answers a personal ad and meets Frank (Eric Roberts) with whom she falls in love. Frank turns out to be a con man and a swindler, but Alma is obsessed with him. She begins to help him by posing as his sister while he cons other women, until she and Frank are forced to flee when one of the victims hires a private detective. Beverly D'Angelo plays Alma with the perfect mixture of both predator and victim and director Andrew Lane understands and directs his actors well, making Lonely Hearts a very well-thought-out and executed thriller despite a somewhat languid pacing.

Darcy Shean
as Speaker at Meeting

While it's not brilliant, Lonely Hearts has a strange enough beat to keep it interesting. Roberts and D'Angelo pull silent truth from their characters using their bodies and facial expression.

There are no featured reviews for Lonely Hearts at this time.