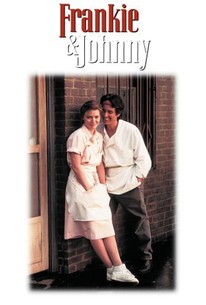 Based on a popular off-Broadway play by Terrence McNally, this drama chronicles the bittersweet romance between an ex-con who gets a job slinging hash at a local greasy spoon and the misanthropic plain-Jane waitress who works there.

Tracy Reiner
as Attorney at Party

Shannon Wilcox
as Christine the Hooker

But this is more than just an irritating movie; it's a disappointing one.

Our Flick of the Week is ''Frankie & Johnny,'' which manages to work as a sudsy romantic picture about big city loneliness despite an awkward performance by Al Pacino in the role of a hash-house dispenser of wisdom.

Chances are you'll have a good time with "Frankie & Johnny," but you won't respect yourself in the morning. It's that kind of movie.

The movie is mature enough to understand that love, contrary to our starry-eyed fantasies, often demands a spark of will - that at some point you have to leave your cloister behind and say that, yes, this is the person I'm going to take a chance on.

Marshall directs as if Marty had never happened.

Marshall adds a poignancy to his lovers' quest by showing the price of failure in characters surrounding them, who either live with their loneliness or, worse, have settled for bad relationships out of need rather than love.

This is what a romantic comedy looks like when it's being built on scar tissue.

An absolutely delightful and tender romantic comedy. Succeeds so well because of the great, very real performances by the two leads and writer Terrence McNally's smart, often hilarious dialogue.

An adult vision of two complicated people converging, finding an ointment but not a cure for the ways in which they have been hurt.

The two A-List actors are definitely on their A game here, erasing most notions of miscasting through the passion of performance.

Rich Cline
Shadows on the Wall
View All Critic Reviews (29)

I never had a chance to write anything about this film directed by Garry Marshall before. But after watching after so many years ago I really enjoyed Al Pacino and Michelle Pfeiffer like the first time. It seems that the movie still has the same vibe like when it was originally released. The title is a reference to the traditional American popular song 'Frankie and Johnny', first published in 1904, which tells the story of a woman who finds her man making love to another woman and shoots him dead... of course nothing like that happens in this movie! Johnny (Pacino) is a middle-aged man, just released from prison who's looking for a job and he's hired as a short-order cook in a local diner where he meets a pretty waitress Frankie... Inspiring love story about ordinary people over forty, who were trying to connect... Michelle Pfeiffer's powerfully subtle acting can tickle the funny bone or pierce the heart with equally uncanny skill and Al Pacino's Johnny is showing a real strong man with pronounced neediness which can be overwhelming at times! Worth watching!