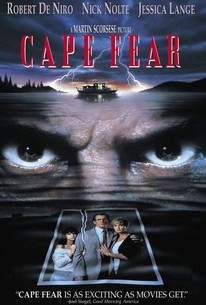 A remake of the 1962 version, this nail-biting and brutal thriller tells the story of a vengeful ex-con who sets out to ruin the lawyer who sent him to prison for committing a series of rapes 14 years before. The plot is based on a story by John D. MacDonald. Look carefully and see cameo appearances by a few stars from the original version.

Will Knickerbocker
as Detective

Jackie Davis
as Jimmy the Dockmaster
View All

Martin Scorsese wasn't supposed to remake the 1962 thriller, but when he did, he brought along his longtime muse and infused the story with an overwhelming amount of trademark chaos...

It's a mess, really. But what a mess! Why do we call Scorsese one of the great filmmakers of his generation? Because, like all the great ones, even when he fails he fails with style and with wit.

The wrath of De Niro, especially when pitched to the level of a jangle-brained Jehovah, is a mighty thing, but, in this case, its inherent cartoonery capsizes this film's small-story frame.

It gives you a pumped-up, thrill-happy ride (assuming you have a stomach for violent pulp) but it doesn't linger in the mind as Scorsese's richest movies do. It's a swell B movie dressed in haute cinematic couture.

It's hard to understand why Martin Scorsese wanted to remake a nasty, formulaic 1962 thriller whose only "classic" credentials are a terrifying performance by Robert Mitchum and a Bernard Herrmann score.

...an exceedingly pulpy and over-the-top thriller that's been suffused with a whole host of appealingly less-than-subtle elements...

Scorsese's remake (also hommage in some ways) is inferior to the original 1962 version, though the acting is good, and both Robert De Niro and Juliette Lewis garnered Oscar nominations.

Martin Scorsese's loose remake of J. Lee Thompson's 1962 thriller is an exercise in audience manipulation, with every frame designed to stagger the senses.

A stylish neo-noir from Martin Scorsese, more mainstream than the rest of his work but still with his personal touch. It is a smart and anguishing thriller that takes a good time to build tension and boasts a terrifying performance by De Niro as the psychopath Max Cady.

Loved De Niro and the suspense was solid.

Martin Scorsese is a director that has a massive reputation on the sub-genre of gangster movies but he's never really been known to tackle a specific genre itself. Due to a contractual obligation with Universal studios and the encouragement of friends Robert DeNiro and Steven Spielberg (who was originally supposed to be the director), he decided to go ahead with this 1991 horror/thriller, making it his first genre and Hollywood movie and also his first remake. After 14 years in prison, psychopath Max Cady (Robert DeNiro) is released where he begins to seek revenge on his former lawyer Sam Bowden (Nick Nolte). He believes that Bowden deliberately held back a report during his trial that would have saved him doing time and vows to make Bowden's life a living hell by terrorising him and his family. The original Cape Fear was released in 1962 and Scorsese makes great references to it. He employs the original actors Robert Mitchum, Gregory Peck and Martin Balsam in cameo roles and has Elmer Bernstein adapt the Hitchcokian original score by Bernard Herrmann. Despite the courteous regard to the original though, Scorsese makes this film his own and updates the material for a contemporary audience by using a more layered approach. He delivers more of a backstory and questions the ethical and moral history of not just DeNiro's character but also Nolte's. As we are introduced to them, Nolte's Sam Bowden dresses in pastel coloured suits and exudes an air of righteousness and innocence while DeNiro's Max Cady is a cigar chomping, tattooed brute. All is not exactly black and white between them though and there's also tension and discord between Sam and his long suffering wife Leigh (Jessica Lange) and their awkward teenage daughter Danielle (Juliette Lewis). Meanwhile, a manipulative and calculating Cady gets his revenge by using the conflicts within the family. By delving more into his characters, Scorsese skilfully cranks up the tension and with superb production design by Henry Bumstead and marvellous cinematography by Freddie Francis he manages to create a real sense of claustrophobia within the family household. While everyone are doing their job behind the scenes though, the ones in front are delivering some of their career best performances. The entire cast deliver the goods here; Nolte and Lange's on-edge, afflicted couple couldn't be better and a young - Oscar nominated - Juliette Lewis is a revelation as the awkward, self-conscious impressionable teenager. However, despite these excellent deliveries, this is DeNiro's film. He is absolutely outstanding and delivers a character that is amongst the finest of his career and another highly impressive transformation; his physique is in exceptional peak condition (apparently he brought his body fat down to 3%) and he has a creepy southern accent that just rings in your ears. The foreboding and malevolent presence that DeNiro shows is deeply unsettling and he, like Lewis, also received an Oscar nomination. Personally, I hold the opinion that he should have taken the award that year. He's such a threatening character and one of cinema's most frightening. The only major problem I had with the film was the denouement. It veers heavily into formulaic territory and despite it sharing the themes of a horror movie, the ending is just a bit too far. For the most part though, Scorsese's audacity pays off and it's an highly admirable addition to his impressive canon. It may lack the subtlety of the original and if it wasn't for the extreme horror denouement, this film would be worthy of a rating higher than the 4 stars I've given it. That being said, it's still one of the most powerful and memorable performances that DeNiro has ever produced.