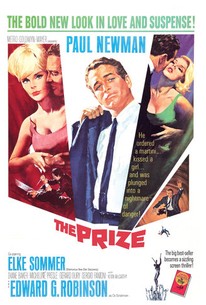 A group of potential recipients of the Nobel Prize gather in Stockholm in hopes of getting the coveted and profitable award. Writer Andrew Craig (Paul Newman) is the disinterested mystery author who believe something is not quite right about Dr. Stratman (Edward G. Robinson). He has been replaced with a twin brother in a Communist plot to kidnap the celebrated doctor. Craig is tailed by two agents who are on to the scheme, and temporarily takes refuge in a nudist colony. He appeals to the secretary of the Swedish Foreign Office (Elke Sommer) and the police. Both camps believe his story to be too ridiculous to be taken seriously. Craig goes it alone, eventually finding the real doctor a prisoner on a ship bound for Russia. The two return to the awards ceremony to claim their prizes and foil the fiendish international kidnapping. The release of the film drew protests from the Swedish government, who felt it was degrading to the ceremony. The story was taken from the novel by Irving Wallace.

Critic Reviews for The Prize

Criticism retreats, disarmed, before a film which hardly even allows itself to become serious about the Nobel prize.

Mark Robson's direction gives The Prize tension and humor, and a good deal of interesting characterization. The Prize should be a much discussed and popular attraction.

The Prize is a suspense melodrama played for laughs. Trouble is the basic comedy approach clashes with the political-topical framework of the story.

The film doesn't have a single rhythm drop. [Full Review in Spanish]

The Prize is a Cold War thriller that doesn't take itself too seriously but really should have. It's a convoluted mess of a film. The dramatic and comedic elements clash and on the whole the story feels disjointed.

For those into high-polish thrillers full of international intrigue and danger around every corner, this one's not to be missed, and a tightening of its midsection would have made it even better.

Set in Stockholm during the Nobel Prize ceremonies, the film is an unsuccessful blend of politics, international intrigues and romance, but the sight of a semi-naked Paul Newman in a nudist colony might appeal to his fans.

Suffers from an unevenness of tone which cannot balance the political turmoil with the sexual playfulness.

The only prize this film takes is the booby prize for crudeness.

Newman heads the cast of this flawed but enjoyable comedy thriller based on Irving Wallace's spy yarn.

Audience Reviews for The Prize

Few are better at the rascally hero role than Paul Newman, here playing a jaded Nobel Prize novelist who has turned to drink, women, and writing dimestore detective stories. He travels to Stockholm merely to collect the $50,000 prize and meets fellow laureate physicist Edward G. Robinson, a German defector before WW II. The next day, his latent curiosity is piqued when he finds the scientist has strangely changed his behavior patterns and seems a couple inches shorter... Entertaining Hitchcockian story that never turns too serious delivers some funny lines and provides engaging subplots and side characters.

Excellent thriller with a great sense of humor