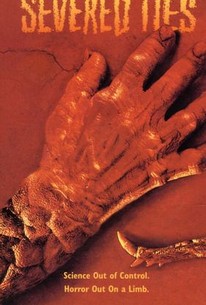 In this darkly funny horror movie, gore and severed limbs abound. It is the story of a young medical genius doing genetic research into regrowing organs. His work is based upon that of his father, a renowned geneticist who was murdered. Before he can continue, he needs a fresher supply of cadavers and his mother is more than happy to help her son. Unbeknownst to him, she and her lover secretly work for an evil bio-chemical company and are behind his father's death. With his mother's help, the boy finally succeeds, but when he finds out his mother's true allegiance he takes the newly developed material and flees. Unfortunately, just before he gets out, the steel door shuts and cuts off his arm. He grabs the limb and then injects the new genetic formula in hopes that it will reattach. It does, but unfortunately, his arm has developed a mind and can attach or detach itself from the boy whenever it feels like it. The young genius ends up befriended by a group of vagabond amputees who live in the sewer system. With their help, the assistance of his arm, and the formula the boy begins working to get revenge.

There are no critic reviews yet for Severed Ties. Keep checking Rotten Tomatoes for updates!

There are no featured audience reviews yet. Click the link below to see what others say about Severed Ties!