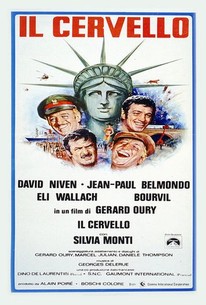 The Brain (Le Cerveau) is a tongue-in-cheek caper film with more twists and turns than a rural Oregon highway. David Niven plays The Brain, so named because it was he who mapped out the British Great Train Robbery (it says here). Now The Brain plans to lift a fortune in NATO money, which is being shipped by train from France to Belgium. Complicating matters are a pair of free-lance thugs (Jean-Paul Belmondo and Bourvil), who hope to steal The Brain's plans and claim the money for themselves. A plot device derived from The Lavender Hill Mob involves a 50-foot replica of the Statue of Liberty. An amusing closing-credits bit caps this exhilarating exercise. ~ Hal Erickson, Rovi

Robert Dalban
as Belgian with a Cold

There are no critic reviews yet for Le Cerveau (The Brain). Keep checking Rotten Tomatoes for updates!

This French action comedy film from the late 60s has Jean Paul Belmondo and his ditsy aide go for the same train heist as Europe greatest and smartest burglar, David "The brain" Niven. The chaos is complete when an Italian mafiosi (Eli Wallach) and his lascivious little sister enter the scene. The result makes for lots of laughs, lovable characters, chaotic chases, misunderstandings and a fun heist scene. Overall fun, entertaining and original.