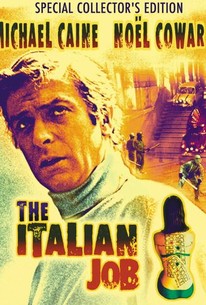 Critics Consensus: The Italian Job is a wildly fun romp that epitomizes the height of Britannia style.

Critics Consensus: The Italian Job is a wildly fun romp that epitomizes the height of Britannia style.

Critic Consensus: The Italian Job is a wildly fun romp that epitomizes the height of Britannia style.

The quintessential British caper film of the 1960s, The Italian Job is a flashy, fast romp that chases a team of career criminals throughout one of the biggest international gold heists in history. Michael Caine is Charlie Croker, a stylish robber and skirt-chaser just out of British prison. Shunning rehabilitation for recidivism, Croker takes over "The Italian Job," a complicated plan to hijack gold bullion from Italy -- right from underneath the noses of the Italian Police and the Mafia. The job, whose original mastermind was murdered, clearly requires the sponsorship of a richer, more established criminal than Croker. He turns to the auspices of the eccentric Mr. Bridger (Noël Coward in his last film role), a suave, regal, incarcerated English crime boss with a peculiar fascination with the Queen. Bridger provides Croker with a quirky group of Britain's most infamous computer hackers (including a lascivious Benny Hill), bank robbers, hijackers, and getaway drivers -- the ex-con is soon well on his way to relieving Italy of the gold. ~ Aubry Anne D'Arminio, Rovi

Frank Kelly
as Prisoner in cell
View All

News & Interviews for The Italian Job

Classic Film Catch-Up: Eight Heist Flicks That Will Steal Your Movie-Loving Heart
All 42 Fresh Movies and Originals Coming to Netflix in January

View All The Italian Job News

Critic Reviews for The Italian Job

What The Italian Job has to revive the viewer of the drowsy first 70 minutes is a whopping good third-act mini-car chase, one which will inevitably compared to the daredevil hill vaulting of Bullitt.

The brio and ambition of The Italian Job can't be doubted and Caine has enormous charisma...

Is there a film - certainly a British film - that delivers a greater infusion of pure joy than The Italian Job?

Caine and Coward play a splendid game of verbal tennis, but by the final reel the laughs are lost in an anthology of dull and deafening car chases.

The cast does its stuff to good effect. Coward, as the highly patriotic, business-like master crook, brings all his imperturbable sense of irony and comedy to his role.

As a film, The Italian Job is hardly a work of unalloyed genius; but as a reminder of the time when Britannia really was cool, it's peerless.

...works as neither an over-the-top comedy nor a gripping heist thriller.

This is an easy yet always enjoyable way to spend your time -- and should remain so for decades to come.

It gets sillier and milder because director Collinson and writer Troy Kennedy Martin could not make up their minds whether they wanted the heist farce to end them all, or an honest thriller with a few laughs.

Anyone who tries to copy almost anything these cars do is likely to be in dire trouble, but it's fun to watch.

The gold is then stashed in a bus, and the predictable chase ensues.

Audience Reviews for The Italian Job

Peter Collinson's The Italian Job is an action classic that is a near flawless heist film. What makes this film standout is the great cast of phenomenal talent. This film is a great blend of thrills, action and witty comedy. Leading the cast is the great Michael Caine as Charlie Croker, who is absolutely wonderful on-screen. Some may find that the film may be a bit slow, but what keeps you engaged in the story are the performances and the anticipation of the heist. Peter Collinson definitely knows how to build up the tension. What makes this film great is the combinations of comic relief, mixed with thrilling action, and add to that great performances. For me the actors that truly stood out were Michael Caine, Noel Coward (in his final role) and Benny Hill. If you're looking for one of the heist films, then give this one a shot. This film is constantly exciting with one of the best chase sequences ever put on film. The heist itself is the standout of the film, and I personally feel it's a far more inventive sequence that the 2003 remake. This film is timeless, and is just as exciting and fun as it was back then. The Italian Job is a must see for every action buff. When watching this classic, you realize how great films were back in the 60's. The film does have a few imperfections, but it succeeds due to solid directing, an engaging plot and great cast. Watching The Italian Job, you realize, they don't make action films like they used to. This is a wonderfully crafted heist film, and quite possibly the best ever in the genre.

Beautifully shot for its time, The (Original) Italian Job is a wacky caper flick that, for better or for worse, is about 50 per cent driving scenes. There are several good laughs, though, and the formula is simple. Plan the heist, carry out the heist. Plus, they risk a run-in with the mafia, and after glorious scenes of a Ferrari driving through the Alps in the opening, then being thrown off a cliff, you'll be hooked. The "chase" does dull the latter half of the film, but this is clearly a film that set a template, and one that's worth checking out... I admit that I'm now curious to see the 2000s remake.

The Italian Job is one of the most beloved and lauded crime capers in British history, and there are times when this is rightly so. Still, the first hour drags so much with the over explanation and boring character development you wonder why anyone would sit through the next thirty minutes. There is a great deal of British wit and in posterity a lot of thought put into this film, and watching can let you better understand the action that unfolds later on. Still, Cain's character of lifetime criminal Charlie Croker is a bland playboy with little interesting characteristics, like a down and out Alfie. Noel Coward was a pleasant surprise on the other hand, playing an imprisoned mob leader controlling everything from his jail cell to the awe of the inmates and the honor of the prison guards. His devilish grin and villainous demeanor made for an interesting twist among the bland bunch of criminals. Even comedian Benny Hill isn't given anything to work with, though he was wildly popular at the time. Still, the heist itself makes up for a lot of the film's imperfections. Though the amount of time it takes to get there is tremendously annoying, the actual choreography of the extensive car chase was inspiring. Because we're not directly given the ensuing plan it's this gigantic surprise, the sheer genius of everything coalescing together with so much ease and suave sophistication, that caper is the only word strong enough to describe it. Warning, of course, that you will compare to Ocean's 11 throughout.

This classic film was ruined 8 years ago by a pointless remake that had nothing to do with the original classic that is The Italian Job (1969). A film that made Michael Caine famous is among my favorite films because of its fantastic action sequences considering the films budget and its outrageous comedy. It's famous car chase involving the 3 mini coopers is hilarious and is always a spectacle to watch. The Italian Job has hilarious wit and a humourous style that could be loved by almost anyone.