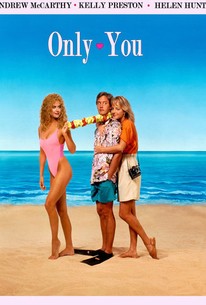 The feature film directing debut of actress Betty Thomas, this romantic farce attempts to mimic the screwball comedies of the 1930s. Andrew McCarthy stars as Cliff Godfrey, a doll house designer and perpetual loser in love who is dumped by his fiancee on the eve of their pre-nuptial vacation to Mexico. Informed by pretty travel agent Claire Enfield (Helen Hunt) that his tickets are non-refundable, the depressed Cliff goes to a bar, where he picks up a drunk party girl, Amanda Hughes (Kelly Preston), who agrees to accompany him on the trip south of the border. Once she sobers up, however, Amanda proceeds to make Cliff's vacation a nightmare, alternately flirting with and teasing him, then rejecting him for more studly prospects. But Cliff runs into Claire, who's staying at the same hotel while photographing a travel brochure, and the two begin spending time together, as Cliff helps her on the project by modeling for her pictures. Though Cliff and Claire are discovering that they are each other's soul mate, the flighty Amanda threatens to destroy their nascent romance.

Critic Reviews for Only You

There are no critic reviews yet for Only You. Keep checking Rotten Tomatoes for updates!

Audience Reviews for Only You

Okay, it's not perfect and it's cheaply made, but this is a nostalgic favourite of mine and I think anyone who enjoyed the 80's/early 90's movies would probably like it. Andrew McCarthy plays Cliff, a guy who's been dumped on Xmas eve. Drowning his sorrows in a bar, he meets Amanda (Kelly Preston), a beautiful but dumb and shallow woman who has also been dumped. The pair get together and he takes her on the Xmas holiday he'd been planning for his ex. While there, he meets Claire, played by Helen Hunt. He had previously met her working at the travel agents and they didn't get along, but they get to know each other better and suddenly Cliff has a choice to make. It's pretty obvious all along, and actually I couldn't stand the blonde bimbo, but it's fun and has some amusing bits. Mostly the cast just work really well.

Not bad romantic romp features an aborable cast and some witty dialogue.