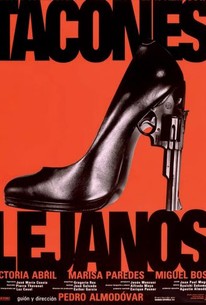 Written and directed by Spanish filmmaker Pedro Almódovar, Tacones Lejanos is a murder mystery centering on flamboyant actress Becky del Paramo (Marisa Paredes) and her daughter Rebecca (Victoria Abril), a television anchorwoman. After being estranged for 15 years, Becky re-enters Rebecca's life when she comes to perform a concert. Rebecca, she finds, is now married to one of Becky's ex-lovers, Manuel (Feodor Atkine). As the mother and daughter begin making up for lost time, Manuel is suddenly murdered at his home. Unfortunately, which of the ladies is responsible for the homicide remains unclear, even after one of them confesses. Released in the U.S. under the title High Heels, Tacones Lejanos was nominated for several Goya Awards as well as the Best Foreign Language Film at the 1992 Golden Globes.

Rocío Muñoz
as Rebeca (as a child)

Yolanda Munoz
as Dancer
View All

Not funny, suspenseful, or original.

Unlike this director's best work, High Heels has no real mirth and not even enough energy to keep it lively.

The director knows what he wants to say, but isn't too sure how to go about saying it.

It's bright and spunky and playfully melodramatic, but something's missing.

Pedro Almodovar's films are an acquired taste, and with High Heels I am at last beginning to acquire it.

Trying to combine drama and comedy in one movie often results in a bittersweet compromise. But in High Heels, Spanish director Pedro Almodovar mixes farce and passion in a way that heightens both extremes.

There are about three scenes in High Heels which work.

With High Heels, Pedro Almodovar is back on top.

Despite the presence of two great actresses, High Heels is a disappointing film, as a murder mystery and mother-daughter melodrama.

Almodovar always starts slow; but then as the story strands come together you can't stop watching.

One's enjoyment of this will depend on how the spectator is able to accept the director's melodramatic sensibilities (the live TV confession is a major standout) and to see Almodóvar winking at us through all the extreme plot twists. Douglas Sirk would have been proud.

Almodovar melodrama about a selfish singing mother retuning to Spain and her TV newscaster daughter after leaving for Mexico 15 years ago and never looking back. In those 15 years, the daughter has all grown up, keeping busy by marrying her mum's ex-lover and going to shows to watch Letal, drag artist, impersonate her mother. The plot is silly, but everyone throws themslves into it with great enthusiasm, and it looks so colourful and stylish and pretty and Spanish. Lovely.

An interesting case study in the relationships between women, both the biological kind and the transsexual kind. Almodovar's rich use of colour is gorgeous and reminiscent of an early 60s movie. Victoria Abril and Marisa Paredes are both wonderfully manipulative, cold, and vulnerable by turns.