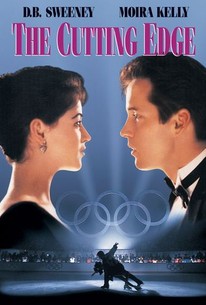 Critics Consensus: Part contrived romance, part hackneyed sports drama, The Cutting Edge shows how difficult it can be to figure skate through cheese.

Critics Consensus: Part contrived romance, part hackneyed sports drama, The Cutting Edge shows how difficult it can be to figure skate through cheese.

Critic Consensus: Part contrived romance, part hackneyed sports drama, The Cutting Edge shows how difficult it can be to figure skate through cheese.

Can a rough and tumble hockey player and a snooty ice dancer find love and a gold medal at the same time? That's the burning (or more appropriately freezing) question in this romantic drama. Kate Moseley (Moira Kelly) is a world-class figure skater training for the Olympics; she has genuine talent, but years of being spoiled by her wealthy family have made her all but impossible to work with. Doug Dorsey (D.B. Sweeney) is a hockey player with drive, skill, and a full complement of arrogance; his team is also on the fast track to the Olympics. Unfortunately, an eye injury suffered during a game affects Doug's peripheral vision enough to put him on the bench for the rest of the season. At the same time, Kate's colossal ego scares off yet another skating partner, and her coach, Anton (Roy Dotrice), needs to find a replacement as soon as possible. Desperate to stay in Olympic competition, Doug agrees to try working as Kate's partner, even though he has a hockey player's macho contempt for figure skating. Needless to say, the first few practices between Kate and Doug do not go well, but in time they learn to work together and become a pair to be reckoned with both on and off the ice. The Cutting Edge was released within a few months of the 1992 Winter Olympic Games.

Kirsten Kieferle
as Woman in Bar

Sam Aaron
as Man in Bar

Larry Armstrong
as People in Bar

Frank Dooley
as People in Bar

Linda Hanchar
as People in Bar

Adrian Pellett
as People in Bar

News & Interviews for The Cutting Edge

RT on DVD: Oscar-Winning Sweeney Todd Slashes Away The Competition
Cusack Checks In to King’s "1408"

View All The Cutting Edge News

Critic Reviews for The Cutting Edge

The dialogue sings, the direction is clean, and there are nearly countless moments that still stand out as iconic today.

A rousing though late-arriving crowd-pleaser of sufficient wit, vitality and intelligence that you don't have to be a teen-ager to be thoroughly entertained by it.

The only thing that would have made this palatable in a mildly camp sort of way would have been the skating sequences.

The chemistry between the co-stars makes it work.

If there were a special Academy Award for Contrived Premise, this picture would be a hot favourite to scoop the statuette.

The movie is shamelessly watchable romantic schlock for the Sassy set.

...a briskly-paced and mostly engaging romance that benefits rather substantially from the affable work of its stars...

The Cutting Edge is an enjoyable piffle, completely divorced from any recognizable reality.

Sweeney and Kelly spark off each other nicely and they are ably supported by the likes of Terry O'Quinn and Roy Dotrice.

With interesting camera angles that show the speed and confusion of performance, the film makes a refreshing point about the merit of victory.

When Doug and Kate are off the ice, The Cutting Edge tends to come to a screeching halt. The script resembles an Astaire-Rogers musical with the song-and-dance numbers cut out.

The Cutting Edge is an endlessly rewatchable, immensely enjoyable film that not only understands but embraces the fact that rom-coms are supposed to be fun.

Audience Reviews for The Cutting Edge

Somewhat a cult classic, and more than anything a vapid romantic comedy, The Cutting Edge is a slightly mindless film about a figure skater and a hockey player who need each other in order to succeed and go to the 1992 Olympics in pairs figure skating. I shouldn't say it's completely mindless, because though the plot is low and meandering, and the actual film itself borders on boring in originality, the characters aren't too bad. Their banter is probably the most enticing aspect of the film, and the reason many people love this enough to grant it another two movies in the late two-thousands. The characters themselves aren't very bright or intuitive and they follow the standard calibration for a romantic comedy: she's rich and privileged, he's blue collar rogue. It's very simple and neat as we expect, but there are some things that really bother me about this film, to an extent. Well, I found that formula without wanting, but the skating routines in this film are lazy. The nineties didn't yield the best slow motion, CGI, or freeze frames, and certainly didn't have music that doesn't make us cringe today. The routines are shown mostly from the skates, and leave much to the imagination They pan to the actors' faces, and then it's back to the skates. It's not that big a deal, but the final scene that clenches their victory is based on a singular move they pull off, and we as the audience don't even see it because they're focused on their faces. I saw a lot of the spoof Blades of Glory in this, especially in the last scene, and weirdly I think that film did a lot better in showcasing the actual skill and beauty of figure skating compared to this, which was far more focused on this partnership. Don't get me wrong about the actors, as Moira Kelly already enchanted me in Chaplin, and D.B. Sweeney is likable though pretending to be rough and tough whilst wearing spandex. There's nothing new or passionate about this, but you'll generally like it if you're into ice skating or want to lie around and watch a goofy romantic comedy.

Not entirely worth your time.

This movie shined because of the great rapport between DB Sweeney and Moira Kelly. It was a fun, funny and cute movei wrapped up in a nice package. When i worked at a video store when this came out. When people asked me for a good movie they hadnt heard of I recommend this one. We had one copy and it was never in. Not one person ever said they disliked it.