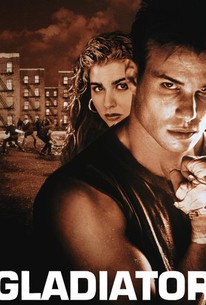 Gladiator is the kind of boxing movie that goes that extra mile -- a self-loathing boxing saga that relishes in bare-knuckled sucker punches, illegal eye-rubs, and gentlemen boxers who obey the Marquis of Queensbury rules by drop-kicking opponents when the are not only down but unconscious. James Marshall plays Tommy Riley, a Windy City high school student conned into participating in the illegal underground boxing arenas of the South Side of Chicago. In high school, Tommy was a prize boxer, and this skill comes in handy when his Father (John Heard) runs up a large gambling debt. When a sleazy boxing manager (Robert Loggia) spots Tommy defending himself during recess, he offers him quick money to box. Tommy, although he hates the sport, readily agrees, thinking his winnings will help his father pay off his debts. He quickly comes under the thumb of unscrupulous boxing promoter Horn (Brian Dennehy), who is involved in fight-fixing and dirty fighting. Manipulating the odds and exploiting his boxers make Horn rich and more venal. In the rancid environment, Tommy befriends another fighter, Lincoln (Cuba Gooding Jr.), a black fighter who sees fighting as his way out of poverty. Inevitably, Horn arranges for the two friends to duke it out in the ring together.

Richar Lexsee
as Father in Park

Dwain A. Perry
as Storm Trooper

Raul Salinas
as Teen in Classroom

Derek Anunciation
as Teen in Classroom

Richard Lexsee
as Father in Park

Mary Flynn
as Teen in Diner

Jill Kiblinger
as Teen in Diner

Mike A. Burgos
as Odds Board Man

The mixture may be slightly unexpected, but it still manages to be predictable all the way.

The idea of the Dennehy's illegal boxing arena is a storytelling masterstroke; it explains the small crowds at the same time it permits the boxers to fight dirty.

The screenplay, contrived to suit the genre, is likewise replete with stock characters.

Gladiator manages to raise a number of social questions in what might have been a simple teen-exploitation boxing film. Chief among the concerns of the film are the relationships between blacks and whites in the inner city.

Gladiator is filmmaking by the numbers, if a particularly glossily executed package

I prefer the remake.

Standard "boxing will keep you off the mean streets where you'll be shot" story.

How did I miss this 1992 gem?! Very impressive performances from Cuba Gooding Jr, James Marshall, and Brian Dennehy. An underrated gem that explores the underground world of professional street boxing. It was well done, and I really enjoyed it! This movie may be among one of the highest quality unknown films that I have come across...

Tommy Riley (James Marshall) goes to a different school and is immediately bullied around and threatened by several of the school's students. After getting in a street fight, Pappy Jack (Robert Loggia) notices Tommy's strong and fierce punch and invites him to be a boxer. Tommy was formerly a boxing champion before coming to this school and his record is undefeated. This town is full of gangs and violence, and one day Tommy helps a black boxer named Lincoln (Cuba Gooding, Jr.), and they then have a good friendship. Tommy is now making good money being a boxer and he has some friends, but something just doesn't seem right. "Gladiator" is an exciting boxing and drama movie. What makes it so great is not only the exciting fights, but the great acting by everybody in the movie, mainly James Marshall, Cuba Gooding, Jr., and Tommy's promoter, Jimmy Horn (Brian Dennehy). If you like exciting boxing movies that have a plot or just great movies in general, I recommend getting "Gladiator." NOTE: That was my Amazon review from the year 2000. The most underrated boxing film I know of, even though it's not THAT "Gladiator" film that everyone knows.

I really liked this film, it was a good film that got better, and in the end failed to make me sad, good ending!