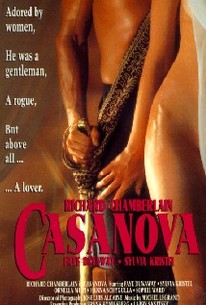 Decked out in powdered wig and pasty "dandy" makeup, Richard Chamberlain stars as legendary Venetian lover Giovanni Casanova (1725-1798) in this made-for-television biopic. The teleplay by George Macdonald Fraser (of "Flashman" fame) follows Casanova as his reputation for being catnip to women builds throughout the 18th century. His sexual exploits cost him several important social and professional posts, and eventually land him in a Venice prison on a morals charge. Casanova's escape attempt provides a strong second act for this 3-hour effort, which also offers an amusing "con job" practiced by Casanova on a willing countess (Faye Dunaway). Frank Finlay co-stars as a nobleman who conducts a decades-long feud with our rakish hero. Filmed in Spain and Italy, Casanova debuted on March 1, 1987.

Elizabeth Mason
as Lady in Waiting

Dennis Vaughan
as Doge of Venice
View All

The combination of love, lust, music and Venice are the compelling ingredients of Casanova, a swashbuckling tale about matters of the heart and the masks we wear.

There are no featured reviews for Casanova at this time.