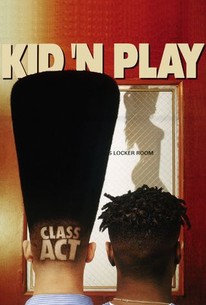 Kid N' Play (Christopher Reid and Christopher Martin) star in this role-reversal comedy that plays like a badly done sitcom without the laughs. The switcheroo occurs when two inner-city high school students -- one a straight-A whiz-kid and the other an angry criminal type -- have to switch identities and are forced to live each other's lives. Christopher Reid is Duncan Pinderhughes, a student with perfect grades but who can't graduate high school unless he passes gym. Christopher Martin plays Blade Brown, whose probation officer gives him an ultimatum -- graduate high school or go to jail. Due to a mix-up in their high school records, Pinderhughes and Brown are forced to take over each other's lives. Brown ends up in a class for gifted students, and Pinderhughes finds himself skulking behind the school building to a shotgun shack that houses all the high school's troublemakers. ~ Paul Brenner, Rovi

20 Under-the-Radar Black Movies You Should Seek Out

Class Act takes a fairly radical idea and turns it into a sitcom, although not without giving us some idea of the possibilities it has missed.

This movie was really nothing but fluff for the decade, featuring hot hip-hop stars of the day.

A film that strains to be entertaining until it's red in the face, but doesn't contain a single laugh.

While not a horrible film, it certainly isn't the type of feature that would make anyone an icon or even a star.

Kid & Play made two half-decent movies. This is one of 'em.