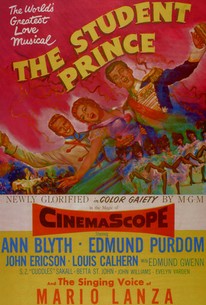 Edmund Purdom plays Prince Karl, but Mario Lanza sings the bold tunes coming out of Purdom's mouth, in this MGM remake of the 1927 Ernst Lubitsch silent picture based on the renowned 1924 operetta by Sigmund Romberg and Dorothy Donnelly, which itself was based on the novel and play by Wilhelm Meyer-Foerster. Lanza was signed to play the German Prince of Heidelberg, but weight and temperament problems caused the director Richard Thorpe to use Purdom instead. Lanza's pre-recorded tenor tones come out of Purdom's lip-synching mouth in the many lusty tunes such as "Drink, Drink, Drink" and "Golden Days." Prince Karl's grandfather, the king (Louis Calhern), wants his sheltered grandson to see the world and sow a few wild oats before he returns to the marriage that has been pre-arranged with Princess Johanna (Betta St. John). The prince ends up in a tavern in Heidelberg and meets and falls in love with Kathie (Ann Blyth), the niece of the local innkeeper. But the King gets sick and dies, and Prince Karl must return to assume the throne. He can't have a peasant girl as his queen, so he must part with his secret lover.

Critic Reviews for The Student Prince

Beer-choruses, balls, parades, and moonlight fill in the gaps of a nostalgic entertainment.

As stiff and old-fashioned as the detachable collars on the men's shirts.

Purdom lipsincs Lanza, and that is the real attraction of this operetta.

Audience Reviews for The Student Prince

There are no featured audience reviews yet. Click the link below to see what others say about The Student Prince!