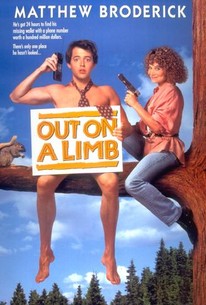 Out on a Limb Photos

A man trying to help out his sister finds himself chin-deep in hot water in this screwball comedy. Yuppie businessman Bill Campbell (Matthew Broderick) is close to sealing a $140 million business deal when he gets a phone call from his little sister Marci (Courtney Peldon), who is convinced that her new stepfather, Peter Van Der Haven (Jeffrey Jones), the mayor of the city of Buzzsaw, California, is up to no good. Though understandably wary, Bill heads to Buzzsaw, where he promptly loses his paperwork on the deal in progress and is confronted by the city's remarkable collection of eccentrics, including the crazed fugitive Sally (Heidi Kling), the subnormal Jim Jr. and Jim Sr. (John C. Reilly and Michael Monks), and Ann (Marian Mercer), the mayor's loopy wife. It turns out that Marci wasn't entirely wrong; year's ago, Peter's diabolical twin brother Matt (also played by Jones) was sent to jail in his brother's place on criminal charges, and now Matt has violent revenge on his mind. Out on a Limb features an original score by noted composer and arranger Van Dyke Parks.

Carolyn DuLucia
as Woman on Street

Tom McGraw
as Man in Bank

Carolyn DeLucia
as Woman on Street

Beth Richards
as Priscilla
View All

Critic Reviews for Out on a Limb

Even a corpse is livelier and funnier than anything else in the flick.

Audience Reviews for Out on a Limb

Francis Veber's another criative screenplay. But not so good and totally unfunny.

Out on a Limb Quotes