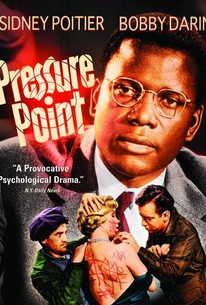 Unable to get through to a particularly hostile patient, psychiatrist Peter Falk goes to gray-haired senior shrink Sidney Poitier for advice. This prompts Poitier to recall his experiences during World War II. While working on behalf of the government, Poitier was assigned the case of psycho Nazi sympathizer Bobby Darin. A complex flashback structure reveals the various influences that led to Darin's warped state of mind and to his life of crime. Poitier perceives that Darin is potentially dangerous, and insists that he needs further treatment. The government sees things differently, and allows Darin, who on the surface shows signs of recovery, to leave the hospital. The horrible results of this decision serve to convince Poitier to follow his own gut feelings no matter what his fellow "experts" might advise, and to continue probing even the most recalcitrant or deceptively "cured" of patients. Essentially a conformist psychological melodrama, Pressure Point truly comes to life whenever Bobby Darin is on the screen. His performance was outstanding, far better than his Oscar-nominated turn in 1963's Captain Newman MD. Unfortunately, the critics were aligned against Darin, possibly because of the singer/actor's well-publicized arrogance; Judith Crist went so far as to compare Darin to Dr. Samuel Johnson's walking dog, quipping that the most remarkable aspect of Darin's performance was not that he did it well, but that he did it at all.

Barry J. Gordon
as Patient as a Boy

A genuine psychological drama, this is a film that takes place almost entirely in therapy sessions. It takes a Freudian approach to psychological trauma ...

This was Bobby Darin's fourth film and perhaps the best in his brief career.

Mostly dull except when the volatile Darin was on the screen and created real tension.

A 'stylized' presentation of racism that says a little more about the enormous talents of Sidney Poitier than it does about the ignorance of inequality and bigotry. *NOTE: Bobby Darin shines in a very unsympathetic role.

Not a bad film but a little too melodramatic. What makes this film interesting is how disturbing and dark the flashbacks are. Poitier is good as always but a suprise performance from Bobby Darin.