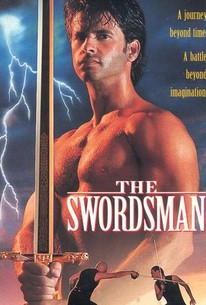 A modern cop meets a mythical figure in this action-fantasy. It all begins when a muscle-bound detective is assigned to find the purloined sword of Alexander the Great, which is said to have been a gift to the conqueror from Apollo. As he searches for the perpetrator, a Greek tycoon, the gumshoe begins experiencing strange flashbacks set over 2,000 years in the past in which Alexander battles his envious cousin Herodotus. He seems to get most of these strange visions after handling homicide victims. Eventually he begins to realize that the visions are related to the missing sword. He finally meets his nemesis during fencing practice and ends up getting involved in the magnate's highly illegal swordplay competition using real blades. As he progresses to the finals, the detective finally figures out that he is a reincarnation of Alexander the Great and that the murderous magnate is Herodotus. The only way the detective will be able to stop the visions is to kill the tycoon, but will he be able to do it?

Critic Reviews for The Swordsman

There are no critic reviews yet for The Swordsman. Keep checking Rotten Tomatoes for updates!

There are no featured reviews for The Swordsman at this time.