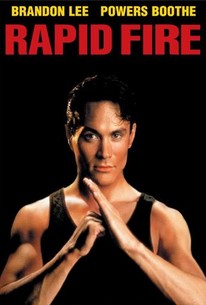 Brandon Lee (son of famed martial-arts film star, Bruce Lee) stars as a young art student who happens to witness a drug murder and is placed in protective custody by federal agents. It's not too long before he realizes that the only real protection he can count on is his own martial-arts training.

Steve Pickering
as Cop in Van

Will Kepper
as Jail Guard

The movie is shameless in exploiting the father-son connection to try to make the star, who exudes a bored, dead-eyed cool, seem sympathetic.

Brandon Lee may want to follow in his father's kick-steps, but unlike martial arts legend Bruce Lee, he's far too pretty for the job.

Rapid Fire is a movie weary almost onto death with the sameness of its genre.

The plot is so flimsy that it's actually moderately comical when one gunfight segues into the next gunfight (the firepower does get increasingly bigger and louder, however).

...the picture remains surprisingly watchable for the duration of its appropriately (and appreciatively) brisk running time ...

I'm here to tell you that Rapid Fire is far and away Brandon Lee's greatest film. And it's a showstopper ranking among the very best action films of the 1990s.

The deft and deadly Lee can turn virtually anything from a wooden door to a tray of silverware into a lethal weapon.

Lee is embracing his Chinese side (his mother is American) unobtrusively to the main attraction: Look at the star power of Brandon Lee.

'Rapid Fire' is one of those action flicks from back in the day where you have a wickedly cool title for the movie, that doesn't relate to the plot in any way. It just looks and sounds cool, happened a lot during the 80's and 90's. You don't seem to see it too much anymore because I reckon they exhausted all possible options. That's my theory anyway, feel free to question it. So here we have a very oriental theme for the plot, aaand that's because Brandon Lee is the star. Heaven forbid they did away with stereotypical plot lines but hey, twas the 90's. So Lee plays this young dude called Jake Lo (Chinese on one side I presume) whose father was killed in a Tiananmen Square protest. I Presume the infamous 1989 protest but its actually not important in any way. He gets lured to a fundraiser for pro-democracy within China, mainly because both he and his father were at Tiananmen Square. Whilst there a drug kingpin called Serrano kills some bloke and Lo witnesses it. So the first half of the film is basically Lo trying to avoid being killed by Serrano before he can testify. The second part of the plot involves another Kingpin called Tau who is in cahoots with Serrano, but is the bigger player. Jake joins up with detective Mace Windu...I mean Mace Ryan (Powers Boothe) mainly for protection but also to bring down Serrano and obtain information about a future shipment organised by Tau. The unlikely partnership must stop both Serrano and Tau. OK so this isn't a buddy cop flick, but its close. The main protagonists comprise of Brandon Lee's young firm, muscles often glistening with sweat, martial arts expert Jake Lo. Alongside Powers Boothe's gruff stern, no nonsense cop who speaks through gritted teeth a lot. Sounds mighty familiar doesn't it, but trust me it really isn't a buddy cop/odd couple/double team fast food flick. Yes Lee's character does become good friends with Boothe's grumpy cop and does actually see him as a father figure in the end, but its not a buddy cop flick. In all honesty Mace tends to use Jake like bait on a string on most occasions, Jake even smacks Mace in the face at one point...but deep down they respect each other. These type of movies are a little tricky to gauge really, the reason being they are cliched as hell but you gotta take into account the year they were made. Being the early 90's you gotta accept the fact that the 80's was still held a strong influence over action flicks. The remnants and relics of that cheesy bygone era were still there to be found in spades. For instance, in this movie all the western baddie henchmen are dressed in suits with greasy slick-back hair, ponytails for some, very Eurotrash. They all seem to have instance access to big guns whenever something kicks off or is about to (and boy are some of their guns impressive!), and they are all terrible shots. The main henchman is a huge lumbering bloke with a slick-back ponytail (ahem) and a penchant for violence and pasta. The main antagonist Serrano, played by Nick Mancuso, is your typical over the top villain with again slick-back hair, a nice suit and he spends all his time in his restaurant (his HQ). On the flip side, all the eastern baddie henchmen are literally every single recognisable American actor of Asian descent you've ever seen in action flicks from the 80's. Al Leong and his Fu Manchu moustache are front and centre, Gerald Okamura, hell most of the background Asian actors from John Carpenter's 'Big Trouble in Little China' basically. Some epic levels of well known Asian character actors in here. The action is actually better than your average dated action fest. Brandon Lee performs lots of kung-fu hocus pocus obviously, its his action vehicle so whaddaya expect. But the gun fights are actually pretty solid stuff truth be told. When the cops battle it out with Serrano and co outside his restaurant its really well shot. Dare I say it actually looks and feels a bit like Michael Mann's 'Heat' with the zooming close-ups, angles and quite impressively realistic action. Apart from that its admittedly cliched business as usual with lots of exaggerated gun porn and cars that explode bit by bit when shot. The obligatory cheesy as fuck sex scene accompanied by rock music, and the obligatory one on one fight scene between the hero and villain (with obligatory nasty death) for the finale. Is this a cliched cheesy action movie? Yes I'm afraid it is. Is it a bad cliched cheesy action movie? Actually no it isn't. On a scale of cliched cheesy action fests this is genuinely one of the better offerings. But that's not because of Lee (who never seems to change out of a vest) or the plot, its mainly because of the action set pieces that engage, look good and are relatively realistic. In other words they aren't ridiculously over the top and require suspension of disbelief. The plot is simple as hell and offers nothing new (except maybe one surprise), the acting is acceptable and Lee shows us much potential which is both good and sad. Overall to look at this might come across as a silly chopsocky affair, no its actually much better than that.

Brandon Lee is awesome, but the movie is terrible.

Awesome! Brandon Lee's film is a fast-packed action in his martial arts sequences against the mobsters and drug lord.