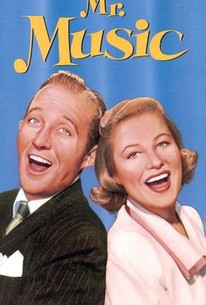 Bing Crosby stars as Paul Merrick, an irresponsible songwriter in Mr. Music. Merrick's improvidence and prodigality has made him persona non grata in show business, so his secretary Katherine Holbrook (Nancy Olson) takes it upon herself to rehabilitate her boss. Meanwhile, producer Alex Conway (Charles Coburn) desperately needs a hit show to survive. Conway takes a chance on Merrick, who then enlists several of Katherine's college-student friends to put on a musical revue. All the group needs now is some money--$300,000, to be exact. Mr. Music is enlivened by several guest-star appearances, including Marge & Gower Champion, Dorothy Kirsten, Peggy Lee, the Merry Macs, and Groucho Marx who performs an amusing vaudeville turn with Crosby. Director Richard Haydn shows up in a pivotal cameo role, billed as "Claude Curdle."

Gower Champion
as Himself

Marge Champion
as Herself

Groucho Marx
as Himself

Peggy Lee
as Herself

Dorothy Kirsten
as Herself

The Meny Macs
as Himself

Mr. Music provides Bing Crosby with one of the fresher film ideas of his recent career.

Great music and a fantastic cast. The one problem is that Bing and Nancy Olson share so little chemistry as a romantic couple. He's much better matched with Ruth Hussey but she's cast as the other woman. Still worth catching for the Peggy Lee/Bing Crosby duet if nothing else.

The story is predictable, but the actors bring charm to the movie, and make it really fun to watch. Plus, there's that cool duet with Crosby and Groucho! I liked this movie, it was entertaining.