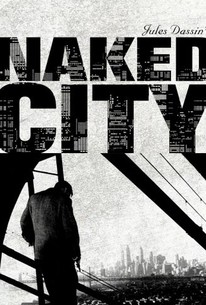 Attractive blonde model Jean Dexter is murdered in her apartment and homicide detectives Dan Muldoon and Jimmy Halloran take on the case. Their investigation ties the model's death to a string of apartment burglaries.

Harold Crane
as Man
View All

Critic Reviews for The Naked City

This horrendously acted, written, and directed crime caper tries to discover who chloroformed a beautiful blonde model and then drowned her in her own bathtub.

Throughout, despite its omniscient, stark melodrama, there has been no sight lost of an element of humor.

A definite parochial fascination is liberally assured all the way and the seams in a none-too-good whodunnit are rather cleverly concealed.

A rather overrated police-procedure thriller which has gained its seminal status simply by its accent on ordinariness and by its adherence to the ideal of shooting on location.

Naked City may be a ho-hum crime picture but it allows New York the chance to play itself, giving us - future viewers - a glorious time capsule from the past.

New York City itself is the real star of this influential crime flick that broke from the established norm by being filmed on actual locations rather than on a Hollywood studio lot.

'The Naked City' is a classic police procedural, brilliantly told, with the tiniest details seeming like huge breakthroughs.

... in light of decades' worth of belief that law enforcement is always right when there is clear evidence to the contrary, perhaps there's more darkness in the truth than there ever was in fiction.

Both a landmark and some sort of masterpiece.

Audience Reviews for The Naked City

Just a ripping good police drama with New York as the ever present backdrop. Barry Fitzgerald is the lead (!!!) (and atypically reserved ... though he does manage to throw in some few reminders of his proud heritage) detective as the death of a model turns out to reveal a ring of jewel thieves. And what lifts this above the usual sort is the interspersed additions about life in New York circa 1950, the people and rhythm of the streets. An announcer detracts from the proceedings but not enough to deflate the tale, including a great foot chase at the end.

Another in a long line of detective films, I can't justifiably call this a noir by any means. Sure, it's certainly gritty and calls upon the same course set of circumstances to show the story, but has none of the dire aspects of noir. Instead of a larger than life language, the detectives all exhibit their own ways, and realism is embedded in every part of this film. This was shot in New York City, and never on sets or lots. It was shot in apartments, on streets and subway tracks, a fact that the narrator of the film proclaims at the start of the film. Besides the fact that this film follows the investigation of a murdered girl, it also takes a quick look into the lives of residents of the city. It's not exactly a love letter to New York, or a condemnation of the many lurid lives that go on during the rush of traffic and the investigations of the police, but it is a wide scope. Throughout a strange kind of narration dubs voices, and fills in the blanks where need be. The story is that of a model who is chloroformed and drowned in her bathtub. Surprisingly the crime itself was showed, and it was amazingly graphic. The look of the film is sleek, shady, and seductively black and white. The actual detectives on the case are varied and at times awkward, but in a good way. The lead detective (Barry Fitzgerald) shows both his professional side as well as his ability to give lessons to beat cop Det. Halloran (Don Taylor). Of all the roles of this film, nothing is dopey except for Halloran, who has playful fights with his wife, lives in Jackson Heights, and is always smiling that same big eared smile throughout the entire film. The plot isn't overly dramatic or contrived in any way, but it's the way it's told, the characters behind the murder that really hold this high in people's mind. My favorite character is the crook Niles (Howard Duff) who lies to everyone, even his fiancee and the cops. He is charismatic, deceitful, and not too bright, but you only feel horror at the depths at which he sinks. It's truly a classic, mostly looking like a documentary about New York at the time, and it would be a shame if you missed it.

A distant procedural that confirms our worst fears: that committing a murder is as commonplace as going to work in the Big Apple. Right from it's unconventional opening, one gets the sense that this isn't your average noir. From there director Jules Dassin treats the viewer to shots of workers trudging along in their daily grind. Some going to their factories, some at their desk, some participating in a brutal slaying. It's just clockwork. Like a job, murder is just part of some people's routine. The near banality of the crime is aided by a candid and temperate narrator who is our guide in this lurid tale. He seems to take pleasure in informing the audience that this isn't a basic studio picture. That it is shot on location, as close to reality as it gets. This even-keel approach gives the feeling like this is something he has seen 1,000 times. That in a city of 8,000, sometimes pill-popping power-hungry women get offed. That is just the way it is. Dassin also taps into the thoughts of the residents of the city. No matter how innocent, hedonistic, or sadistic, they are treated equally. Connected by this city, for better or for worse. Pre-dating Scorsese and Allen, who are famous for using the city as a character in the story, Dassin also gives the city a prominent role here. From the opening with the Empire States Building, to the parents angrily-sobbing over how their choices may have lead to an untimely death with the Brooklyn Bridge looming in the background, to the breathtaking ending on said bridge, the city seems to have a distinct impact on everyone's actions. In a way, it seems to be the main character. As one can see this isn't your average noir. Dassin, who would later have a rather tumultuous relationship with Hollywood, takes a lot of chances here and crafts one of the more unique noirs that I have seen.

Crazy cool Weegee-esque 1947 New York exteriors. This movie begins where most film noirs end. Slightly humdrum police procedural but at the time it was a real breakthrough, since imitated by Dragnet and a hundred Jerry Bruckheimer TV shows. There are eight million stories in the naked city and this one ends with a stunning chase sequence on the Williamsburg Bridge.