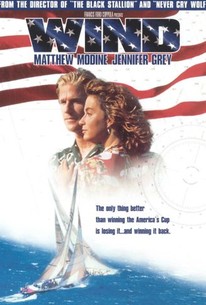 Wind is set in the world of competitive yacht racing, where a young sailor (Matthew Modine) is intent on winning the America's Cup, as well as regaining the affections of his ex-girlfriend (Jennifer Grey). As the film opens, Modine chooses to race the America's Cup instead of staying with Grey. She leaves him and his team loses the race, leaving him devastated. Modine tracks Grey down, finding her with a new boyfriend, who happens to be an engineer. He persuades her and her new boyfriend to help him build a new yacht, which he plans on using in his pursuit to regain the America's Cup.

Matthew Modine
as Will

Billy Bates
as Cat
View All

The real reason to see this movie, though, is because it makes a big yacht race seem so glorious, such grand adventure. Ballard is a former cinematographer with a knack for visualizing the outdoors.

In fact, most of the action on land is below C level, worth maybe a D-minus at best.

Most bracing and breathtaking film ever made about world-class sailboat racing.

OMIG-D -- talk about an exhilarating movie!!! It is absolutely wonderful -- Play it in the middle of the winter when upi want something refreshing