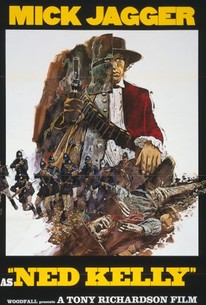 The life and times of legendary Australian outlaw Ned Kelly (Mick Jagger) provide the basis of this exciting biopic. Kelly launched his terrorist campaign against British colonialists after he was wrongfully imprisoned. Following his release, he forms an outlaw gang with his stepfather and his brothers and begins stealing horses and killing anyone who stands in the way. The songs on the soundtrack were written by Shel Silverstein. The film is also known as Ned Kelly, Outlaw.

Shirley May Donald
as Mrs. Byrne

It is a film to which one applies the damning word 'interesting'.

Richardson's bushranger biopic merely applies a simplistic gloss to the 'outlaw' image already projected onto Jagger... and his role as the legendary Australian anti-hero emerges as little more than an uncomfortable displacement of his tabloid notoriety.

Colorful vignettes... only touch on but do not fully reveal the drama or the history behind the events.

The blame has to be laid at the door of director Tony Richardson, whose handling sometimes obscures the message and buries the drama.

Curiously though, as it so often does, the rare convergence of everything gone wrong makes for pretty compulsive viewing.

This film is worth seeing for those who want to see what Mick Jagger looks like when sporting an Abe Lincoln beard.

An interesting movie, which tries to show that Mick Jagger is a brilliant actor, I wouldn't say he's that good, but he's alright. The story is pretty good. It's a pretty good movie, but it could be better.

I enjoyed it because I tend to like Westerns, and this is one, even if it's Australia rather than the US. The movie struggles along though, so unless you are a fan of Jagger or the Western genre don't bother.