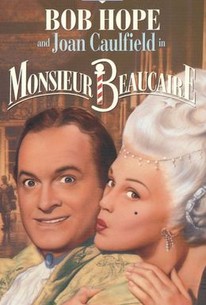 Monsieur Beaucaire, Booth Tarkington's novel about an 18th-century French barber who poses as a swashbuckling aristocrat, was the surprising source for this Grade-A Bob Hope comedy. While in the original novel the tonsorial hero pretended to be someone he wasn't by choice, in this 1946 film Hope is coerced into posturing as a nobleman on the threat of death. It's "out of the frying pan" time here, since Hope will be a target for execution the moment he weds a Spanish princess in place of genuine noble Patric Knowles. Bob's actions will prevent a war between Spain and France, but it's likely he won't be around to celebrate the Peace. Hiding his cowardice by cracking wise at every opportunity, Hope manages to save both the day and himself; he even rescues Joseph Schildkraut, the film's nominal villain, from the guillotine. The female contingent is represented by Joan Caulfield as Bob's covetous girl friend, Marjorie Reynolds as a princess, and Hillary Brooke as a haughty schemer (who is given her just desserts in an early slapstick set-piece). Woody Allen has long expressed his affection for Monsieur Beaucaire, an affection made doubly obvious in "homage" fashion by Allen's 1975 costume comedy Love and Death.

Constance Collier
as The Queen

Mary Nash
as The Duenna

Helen Freeman
as Queen of Spain

John Mylong
as Minister of State

Tony Paton
as Waiter
View All

Above-average Bob Hope costume comedy… borrows its title and inspiration from a silent Rudolph Valentino romance-drama, but transforms the original premise of a duke disguised as a barber into a farce about a real barber and a duke switching places.

Those who do not remember the original 1924 version will have lots of fun watching Bob Hope's antics. [Full Review in Spanish]

There are no featured audience reviews yet. Click the link below to see what others say about Monsieur Beaucaire!