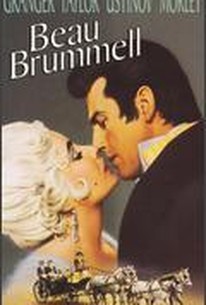 As an actor, British film star Stewart Granger was very handsome, but this is all that is required of him in Beau Brummell. Granger plays the famed 18th-century dandy and social arbiter who rises from poverty to become the adviser and severest critic of the Prince of Wales (marvelously portrayed as a self-involved neurotic by Peter Ustinov). Secure in his station in life, Brummell goes one step too far when he jokes about the Prince's obesity. The future King George IV will forget the whole thing if Brummell will apologize, but the haughty trendsetter refuses to do so. Brummell is banished from court, losing everything -- including his chance at finding happiness with the aristocratic Elizabeth Taylor -- in the process. Filmed on location in England, Beau Brummell was based on the same war-horse play by Clyde Fitch that had served as the inspiration for the 1924 Brummell starring John Barrymore. ~ Hal Erickson, Rovi

Peter Ustinov
as Prince of Wales

Peter Ustinov is excellent as the insecure Prince of Wales.

The others, though well directed by Curtis ' Bernhardt, accompanied by Richard Addinsell's music, and lovely to look at, are of medium quality only.

Fancy, plush drama which hews a bit closer to actual history than most historical films of the time. Beautiful costumes, Elizabeth is ravishing and the cast includes an astounishingly young Rosemary Harris. Granger is fine in the lead but the best performance comes from Peter Ustinov.