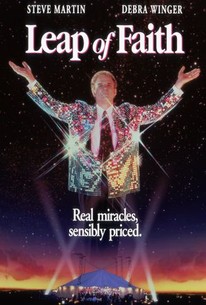 Richard Pearce's comedy-drama stars Steve Martin as Jonas Nightengale, a con artist whose latest scheme has him posing as a traveling evangelist. When his caravan breaks down in a poor Southern town, he tries to make the best of the situation by exploiting the community for all its worth.

Liam Neeson
as Sheriff Will Braverman

Georgia Ellis
as Angel of Mercy
View All

Critic Reviews for Leap of Faith

The movie is lively but half-baked: it dribbles away its promising subject. Some Christmas feast this has turned out to be: it's like munching on leftovers.

The movie itself has considerable qualities, among them Martin's performance as Nightengale. This isn't the sleek, groomed, prosperous Steve Martin we've seen in movies like L.A. Story. It's Martin as a seedy, desperate, bright, greedy man without hope.

Dances back and forth across genre lines to memorable but mixed effect.

It's half a good film, only lacking the courage of its cynicism.

Miracles cannot be summoned by command, they happen spontaneously by grace, and often to those who least expect them.

I actually walked out of this one...bad!

I believe - that this movie is pretty funny.

Audience Reviews for Leap of Faith

Predictable from the first minutes. The story's to blame here. Martin is good as a bogus preacher but is given nowhere to go.

I like most Steve Martin movies. This one was fun enough with him as a faith healer stuck in a small town. I enjoyed it. There was comedy, drama and a bit of romance. A successful premise.

Steve is a con man who plays on people's faith.