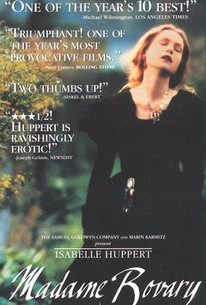 Literary critics long regarded Gustave Flaubert's iconic French novel Madame Bovary as unfilmable (despite several attempts by Vincente Minnelli and others to bring it to the screen), but Nouvelle Vague architect Claude Chabrol set out to definitively prove them wrong with this Oscar-nominated feature adaptation from 1991, starring Isabelle Huppert (The Lacemaker). Huppert stars as Emma Bovary, a woman whose happiness depends exclusively on elements outside of herself. She spends her days indulging in flights of fancy and endless romantic longings, emotionally estranged from her good-natured but ignorant husband Charles (Jean-François Balmer) a physician whom she married as an escape from her landowner father's farm. Her fate seems poised to change when she meets and falls hard for Rodolphe Boulanger (Christophe Malavoy) - a lover who takes her to bed and then vows to elope with her. Pinning all of her hopes on this, she invests in a traveling costume that she's unable to afford (rendering herself completely in debt with a local millner), and plans to skip town with Rodolphe when the monies come due. Alas, Rodolphe, as it turns out, never planned to follow through with the elopement plans, and promptly abandons Emma, leaving her to face the dire consequences of her foolish decisions.

Dominique Zardi
as The Blind One

Part of the problem is that the book is full of somehow lacerating details, which a loving director must reproduce but can't help transforming into their opposites: there's no such thing as a dull antique.

[Isabelle Huppert] has played many other, more extroverted, even cheerful roles, but Chabrol was quite right to find Emma Bovary within her.

Unfortunately, her leading men can never match Huppert. Balmer is nearly as absurd as M. Hulot. Christophe Malavoy is all floppily dashing hair and country squire costumes as Rodolphe, and Lucas Belvaux is hopelessly callow and not at all sensual as Leon.

The beautiful Isabelle Huppert never quite catches the Flaubert vibe.

Treating this 19th century novel with tender loving care and just the right emphasis, director Claude Chabrol has made it speak to our times.

There are no featured audience reviews yet. Click the link below to see what others say about Madame Bovary!