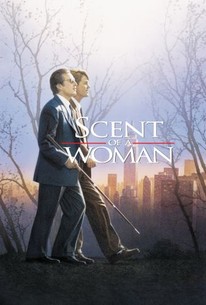 Critics Consensus: It might soar on Al Pacino's performance more than the drama itself, but what a performance it is -- big, bold, occasionally over-the-top, and finally giving the Academy pause to award the star his first Oscar.

Critics Consensus: It might soar on Al Pacino's performance more than the drama itself, but what a performance it is -- big, bold, occasionally over-the-top, and finally giving the Academy pause to award the star his first Oscar.

Critic Consensus: It might soar on Al Pacino's performance more than the drama itself, but what a performance it is -- big, bold, occasionally over-the-top, and finally giving the Academy pause to award the star his first Oscar.

Scent of a Woman Videos

Scent of a Woman Photos

Driven by an extravagant, tour-de-force performance by Al Pacino, Scent of a Woman is the story of Frank Slade (Pacino), a blind, retired army colonel who hires Charlie Simms (Chris O'Donnell), a poor college student on the verge of expulsion, to take care of him over Thanksgiving weekend. At the beginning of the weekend, Frank takes Charlie to New York, where he reveals to the student that he intends to visit his family, have a few terrific meals, sleep with a beautiful woman and, finally, commit suicide. The film follows the mis-matched pair over the course of the weekend, as they learn about life through their series of adventures. Though the story is a little contrived and predictable, it pulls all the right strings, thanks to O'Donnell's sympathetic supporting role and Pacino's powerful lead performance, for which he won his first Academy Award. Scent of a Woman is based on the 1975 Italian film Profumo Di Donna.

Critic Reviews for Scent of a Woman

While fairly predictable and unoriginal, it is nevertheless entertaining.

An irascible bully who proves to have a heart of gold, Pacino's character seems manufactured by a computer programmed with box-office grosses.

Scent of a Woman indulgently stretches a modest conceit well past the breaking point.

Corny and heart-warming, with O'Donnell proving almost a match for the master.

The good thing is that the principals and film makers make the absolute most of a conventional opportunity.

There's nothing as convincing as an Army vet talking to privileged prep school boys about boys in battle getting legs blown off, and how, when the bullets fly downrange, some boys run and some stand their ground. Every high schooler needs to see it.

Pacino's performance is that rare kind that captivates all on its own, stealing every scene away from everyone else in it.

A film of great power.

Pacino, meanwhile, devours his role with such theatrical relish that Scent of a Woman remains tolerable, even at its most cloying moments...

Thanks to a landmark performance by Al Pacino, Scent of a Woman is an agreeably watchable film. If they'd made it half an hour shorter and re-written the ending, it could have been a great one.

Audience Reviews for Scent of a Woman

Pacino is on fine form with a dazzling performance but it's not enough to make this film shine in my eyes!

Al Pacino is magic in this film. You can't take his eyes of him. Added to this, the film is moving and carries an important message. It is a satisfying, uplifting, triumphant film that must be watched!

When things get tangled, tango on! Great Film! The Scent of a Woman is the kind of film that many would think belongs to a bygone era. While it is frank and contemporary without sugar coating it illustrates the value of character over glitz and how small acts can have long lasting consequences. The Scent of a Woman is very satisfying on many levels. Of course the primary reason it succeeds is Al Pacino, whose Oscar was well-deserved, needless to say. Chris O'Donnell doesn't overplay his part, and in doing so is realistic and natural. The character development is superb, dialogue terrific, glamorous locations and a story line that requires the characters to show themselves to be the people they really are. The film has a lot of funny lines and great drama. Frank is a retired Lt Col in the US army. He's blind and impossible to get along with. Charlie is at school and is looking forward to going to university; to help pay for a trip home for Christmas, he agrees to look after Frank over thanksgiving. Frank's niece says this will be easy money, but she didn't reckon on Frank spending his thanksgiving in New York.

Al Pacino is one of the most respected and talented actors in the history of filmmaking. So why did it take him over 20 years in the business before he finally got his hands on one of those golden little baldies, that go by the name of Oscar? It's a question that will confound many but at least now, with this performance in 1992, it probably, proudly, rests on his mantelpiece. In order to make some money for a Christmas trip home, impoverished college-student Charlie (Chris O'Donnell) agrees to look after Frank (Al Pacino), a blind retired Colonel for Thanksgiving. Babysitting takes on a whole new dimension when Frank decides he wants to spent the weekend living it up in New York City. At the time of this films release Pacino had had 4 nominations for Best Actor and 3 nominations for Best Supporting Actor. He had produced such sterling work in classic films like "The Godfather", "Serpico", "Dog Day Afternoon" and "Scarface". This is only a few in a long list but, finally, no-one could argue with his bravura portrayal of a blind, hard drinking, ex-Army colonel. This isn't the type of film you'd tip for Pacino receiving an award but it's a performance that can't be ignored. Yes, grandstanding does ensue, but hey! It's Pacino, he's allowed. There's an unsettling intensity to his performance that's so powerful, it's hard to take your eyes off him. Ironically, he plays a blind man but his performance allows the audience to see. To see, what an actor can encapsulate. The film itself is a tad lighthearted and despite being overshadowed considerably, a young Chris O'Donnell handles himself well in such company. But it feels like the story itself is only a vehicle, or series of scenes, in which to allow Al to chew up. It's enjoyable stuff nonetheless and at a running time of 2hrs 30mins, you wouldn't know. The time flies by as it's so much fun. A major demerit is the Hollywood perfect, rousing, finale though. The schmaltz factor goes through the roof, leaving you feeling a bit embarrassed at the audacity in even attempting it and it seriously sells the film short. If I was to rate this based on Pacino's performance, it would be an unquestionable 5 stars. It's one of his finest. However, the flimsy material brings the film down a notch.

Scent of a Woman Quotes