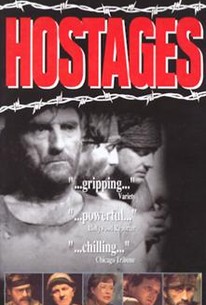 Hostages is a made-for-cable film that chronicles the captivity of several Western hostages who were held in Lebanon for five years during the mid-'80s. Combining newsreel footage with re-enactment's, the film captures the horror of the hostages--Americans Terry Anderson, Thomas Sutherland, Frank Reed; British citizens John McCarthy, Terry Waite; and Irish teacher Brian Keenan--as they are held by the Muslim fundamentalist group, the Hezbollah. It also follows the trials and tribulations of their families, who struggle against government bureaucracy to free their loved ones.

Stanton is stand-out among cast.

There are no featured reviews for Hostages at this time.