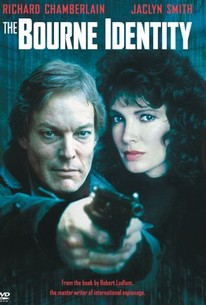 Based on a best-selling espionage thriller by Robert Ludlum, this exciting drama originally aired as a television miniseries and tells the story of a spy's attempt to regain his lost memory. Accompanied by a mysterious woman who may or may not be an ally, he travels across Europe trying to solve the mystery of himself and to avoid the enemy spies who want to kill him.

James Walker
as Chef
View All

News & Interviews for The Bourne Identity

View All The Bourne Identity News

Critic Reviews for The Bourne Identity

There are no critic reviews yet for The Bourne Identity. Keep checking Rotten Tomatoes for updates!

Audience Reviews for The Bourne Identity

Robert Ludlum's bestselling novel The Bourne Identity is adapted as a mildly suspenseful and atmospheric TV movie. The story follows an injured man who washes ashore with no memory of who he is, but he slowly starts to suspect that he's a hired assassin after following several clues and being pursued by a hit squad. Richard Chamberlain and Jaclyn Smith lead the cast and give cheesy, melodramatic performances. And Roger Young's meandering, slow-paced directing doesn't do the film any favors. The writing too is rather poor, particularly at making Bourne's missing past a compelling mystery (which is a major failing). Incredibly long and arduous, The Bourne Identity is a bland spy thriller that feels rote and cliché.