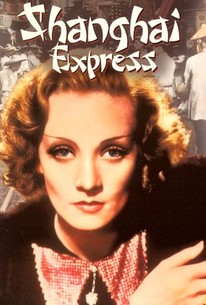 Two notorious women of the night are aboard a train that is hijacked by rebel Chinese.

Anna May Wong
as Hui Fei

James B. Leong
as Rebel

Miki Morita
as Officer
View All

Nothing in an admirable film is better than the first meeting between Lily [played by Marlene Dietrich] and Hue Fei (Miss Anna May Wong).

The first third of Shanghai Express is on a high artistic plane. One forms great expectations of dramatic development; of character-study; of technical finesse. But suddenly the whole thing collapses.

Peak Dietrich merging with peak von Sternberg... Each artist and their respective styles coming together to create something distinct and dazzling.

The film has compensating strength in the star, who photographs more beautifully than before and, though she is acted off the screen by Anna May Wong, shows herself unique in Hollywood by being majestically beautiful.

Shanghai Express is a picture of the new school, and when Marlene Dietrich promises Warner Oland to visit him at his castle if he will refrain from destroying Clive Brook's eyesight with a red hot poker, you will not find the situation banal.

The finished product is an example of what can be done with a personality and photogenic face such as Marlene Dietrich possesses to circumvent a trashy story.

Reportedly the top-grossing film of its year, this finds the actress cast as a promiscuous woman who utters the immortal line, "It took more than one man to change my name to Shanghai Lily."

For those who cherish Dietrich as the uber vixen, Shanghai Lily is one of her best exemplifications.

This picture has been produced artistically, with excellent direction and acting.

The picture itself ranks high among the really artistic creations that the screen has put forth -- and this through the uncanny direction of Josef von Sternberg, who has vitalized it into something far removed from the ordinary.

[Marlene Dietrich's] talent convinces, although the subject, in truth, is unbelievable. [Full review in Spanish]

Marlene Dietrich stars as "Shanghai Lily", a woman of some ill repute traveling across China in a passenger train. The other passengers have nothing but contempt for her and her female companion (Anna May Wong). Well, everyone but Captain Harvey (Clive Brook). He and Marlene had a relationship years ago, but the Captain didn't trust her and threw her over. Since then, she's been wandering the Chinese countryside, destroying men's lives wherever she goes. When Mr. Chang (Warner Oland, known for his role as Charlie Chan) turns out to be the leader of a rebel force, we learn to what extent Marlene still loves the captain and to what extent she will go to protect him. Despite exotic locales and characters, it's Dietrich who is the sole reason for watching "Shanghai Express". She's incredibly beautiful, emotive, and her costumes are a movie unto themselves. Director Josef von Sternberg knows how to shoot his leading lady, and there are moments when Dietrich's face is as beautiful as a framed work of art.

Marlene is terrific in this as is Anna May Wong. Banton's creations for them are eye popping but the whole thing is almost undone by the dreadful perfomance by Clive Brook.. Marlene's passion for him comes across as a mystery since he is a block of wood throughout the film.

marlene and anna may wong are simply divine amid the trademark von sternberg atmosphere of exotica. beautifully shot with many classic poses. lily's once and future lover clive brook is an awful stiff tho

"shanghai express" is the only piece in void among the paramout set of marlene dietrich glamour collection. the mere resource to obtain this dvd copy is european market, and the reason is indisputedly political due to its negative portrait of china then, a hybrid who chooses his yellow side as the mercenary traitor, and also a chinese woman as ravished prostitute. but ironically "shanghai express" is one among the several rare flicks which doesn't present asian character in yellow-face stereotype. and there's hardly any other asian actor/actress in hollywood movies could emulate anna may wong's hard-boiled individuality in it. it's a story about two prostitutes who go astray from life on shanghai express in china: dietrich chooses the bosom of her former love flame; wong urgently dives into patriotic service to china. it has chinese traitor who schemes to kidnap important foreign official to blackmail the government to revive his position. and dietrich's lover is targeted for sure, then it involves a philandering bargain of self-sacrifice to assure her lover's safety. but it is wong's character who slaughters the villian then be the woman savior of the day. of course, it's guaranteed with crowd-pleasing romantic ending, showcasing dietrich's stocks of glamour to its utmost usage. first of all. the movie got bombarded by the moral code at its release for its corrupted depiction of female characters. dietrich's shanghai lily and wong's hui feng are all women who earn a living by sex, strutting rampantly on train. as dietrich remarks "respectful people are usually dull". wong pushes the limit with utterance "i don't know the standard of your respectfulness. good-bye", then toss the business card back to a puritanical matron who tries to approach or reform them. second of all, it has a very derogatory but also realistic delineation of racism then. when wong's character reaches out to shake hands with clive brook courteously, it was rebuffed in a very condescending way. and it also has dialogues like "so you choose the chinese side in you, what's good about it? you eat all the rice in the country and that's what you're gonna be"...but neither of warner oland's chinaman or anna may wong's prostitute abandons their origin to serve any western course. in one scene, as dietrich attempts to show wong her gratitude for disposing the big villain, wong simply replies "my killing him has no consequence with you, and i did it just to settle his debt to me!" this tense condition has an aroma of chinese xenophobia to foreign influence as if it demostrates outloud: they don't really care the well-being of foreign nations, and they just wanna mind their own business. third of all, it has some tint of homosexual(or bisexual) innuendos just like most dietrich's movies. when shanghai lily wants to make love clandestinely, she would draw down the curtain for privacy. in scenes which she enters clive brook's chamber and the scenes with anna may wong, the curtain is pulled downward for sure. "shanghai express" has the classic dietrich glamour in it, and gorgeous costumes form travis banton. undoubtedly, another fashion milestone in marlene dietrich's career. but its political involvement with chinese government censors its existence in china as well as in united states. and consolingly, it still exists becuz of marlene dietrich's star magnitude.